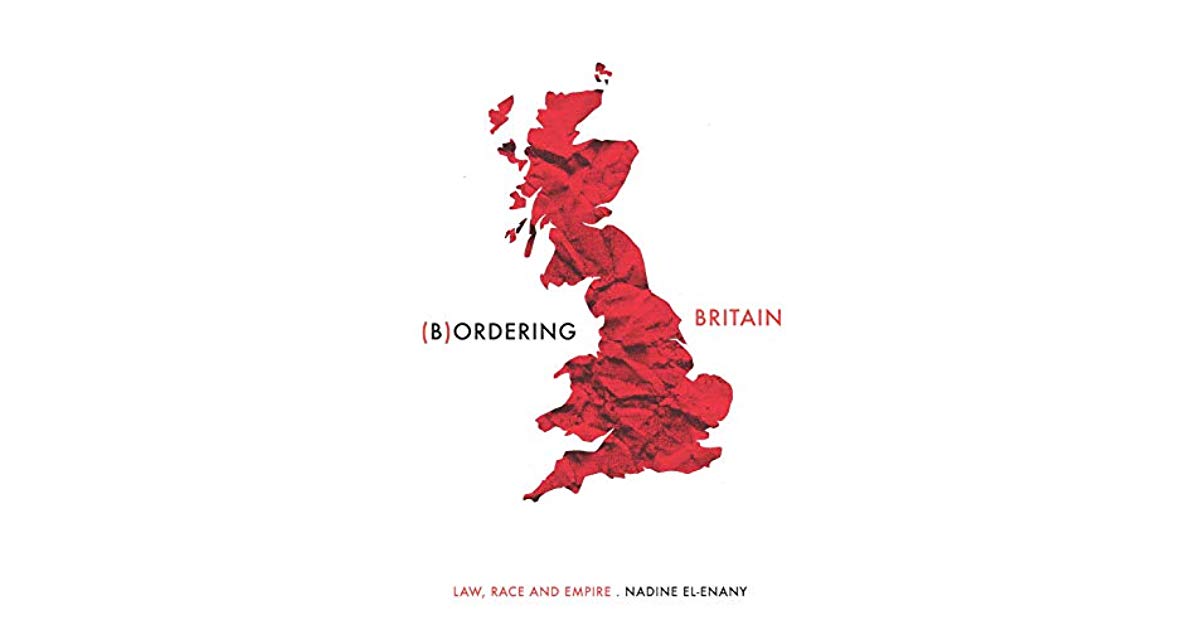 In (B)ordering Britain: Law, Race and Empire, published last week by Manchester University Press, Nadine El-Enany argues that British nationality and immigration laws are acts of colonial theft. Having expropriated untold wealth from the countries comprising her empire, Britain used this seed capital to construct infrastructure, health, wealth, security, opportunity and futures for her white citizens. As the empire was defeated in the years following the Second World War, Britain then retreated, raising the drawbridge to keep her stolen riches to herself. Immigration laws introduced since the Commonwealth Immigrants Act 1962 are “the tool that ensures that dispossessed peoples have no claim over what was stolen from them.”

El-Enany also argues that the same immigration laws which exclude new entrants also “maintain Britain as a racially and colonially configured space in which the racialised poor are subject to the operation of internal borders and are disproportionately vulnerable to street and state racial terror”. Racialised people are denied access to the spoils of empire through policies like Theresa May’s hostile environment even if they are technically citizens. Meanwhile the same internal borders are invisible and permeable for most white people.

The language of terror and violence deployed by El-Enany and indeed the whole concept of colonial theft will be jarring to many who read this review. It is hard to argue with the facts, though. A similar point about Britain having reaped the rewards of empire was made by Danny Dorling and Sally Tomlinson in Rule Britannia: Brexit and the End of Empire (published in 2019 and a good companion piece to El-Enany’s work).

The standard British view of her empire, sometimes spoken aloud but often not, is that it was good for the uncivilised savages who were benevolently conquered and ruled. The reality is that the British empire was not an act of altruism. It was a commercial enterprise which syphoned off as much as 10% of annual Indian GDP every year.

Racial theory, which can just about be summed up by applying the pithy British phrase “delusions of grandeur” to skin colour, was then and continues to be used to pretend otherwise. This history is not something taught in British schools and many will simply never have thought about Britain’s past in this way.

Reading (B)ordering Britain, there are times when I felt the British were damned if they did and damned if they didn’t. The hypothetically universal citizenship of the British Nationality Act 1948 and the universal subject status preceding it, are argued to be guilty of the twin sins of colonial ambition and classification. But so too are the retrenchment from the legal rights attached to that status from 1962 onwards. Both can be true, though: genuine decolonialisation would be to enable open migration without the imposition of a colonial-type legal status.

El-Enany is scathing of the role of the British legal order and courts in upholding this regime. She points out that in the case of Bugdaycay, venerated by some immigration lawyers for the hand-wringing exhortation to apply “most anxious scrutiny” to asylum cases, the court declined to even consider three of the four complaints before it. I learned that the woman in the notorious case of N v UK did indeed die shortly after her removal from the United Kingdom. El-Enany argues the ruling reproduces the “let die” logic of colonialism, which saw colonial administrations construct the murderous spread of disease and famine as nature’s way of dealing with so-called surplus populations.

Legal practitioners like me are arguably let off too lightly, with El-Enany describing our complicity in this system as “necessary”. She suggests that serious campaigners should be wary of arguments for migrant solidarity that centre on legal status recognition. Pointing out that the Windrush generation were technically citizens, for example, only legitimises these colonial-era classifications.

Immigration and nationality laws are not inherently acts of colonialism. All countries, whether or not they have a colonial history, have both. And the first British immigration law, the Aliens Act 1905, was not targeted at British subjects. But the nature, history, extent and effect of British immigration and nationality laws undoubtedly have at the very least a colonial flavour. El-Enany arguably casts her net too wide, also for example arguing that the British welfare state “has always embodied the assertion of white entitlements to the spoils of colonial conquest” despite health insurance being available to aliens after the First World War.

Finally, there are some nuggets for fellow immigration law geeks aside from the (unsurprising) outcome of N v UK. “Asylum” and formal refugee status were apparently two separate forms of protection in the UK until 1979 and the Home Office was a bastion of liberalism in the early days of the Aliens Act 1905, at least to those in fear of persecution. It was sufficient to be Jewish and from Russia to be exempted from the bar to entry that would otherwise have applied. A top civil servant explained to the Home Secretary in 1906 that:

The present state of Russia may be taken to be so notorious that it is a matter of common sense that if a man proves he comes from Russia and alleges that he is a refugee there is a presumption of fact that his statement is correct.

Such common sense is today sadly subordinate to the posturing of politicians.