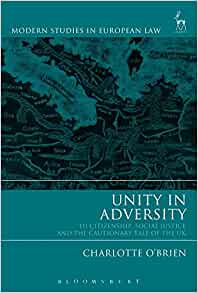 Book review: Unity in Adversity: EU citizenship, social justice and the cautionary tale of the UK by Charlotte O’Brien

We are told repeatedly by UK politicians that EU citizenship is too expansive; it confers too many rights to encourage too much freedom of movement to too many people. This is why The British People voted to leave in the 2016 referendum, we are told. It is refreshing to read in Charlotte O’Brien’s Unity in Adversity: EU citizenship, social justice and the cautionary tale of the UK a critique arguing that EU citizenship is too narrowly defined and that it has failed citizens of the Union.

O’Brien’s approach to her subject of study is groundbreaking. Rather than merely commenting on implementation in the abstract, she worked with and alongside EU citizens and those advising them to experience first-hand how EU law works in practice. This has given her real insight into how EU citizens experience EU law, including those who are most marginalised in society.

O’Brien argues that EU citizenship has never properly escaped its origins as a market facilitator of free movement for workers. In this model of citizenship, EU citizens are commodities akin to capital, goods and services. The EU law principle of proportionality offered a way of treating EU citizens more as rights holders but this possibility has, so far, proven chimerical.

For a time it felt as though EU citizenship might evolve beyond these beginnings. But O’Brien argues that the UK put paid to that possibility. The overt and self-declared hostility of the UK government to EU free movement law and principle from 2014 onwards illustrated the limits of “law as lists” rather than “law as justice”; lists of conditions, lists of circumstances in which the right to residence is lost and lists of exclusions. O’Brien argues that not only have the UK courts been entirely complicit in this approach, ignoring the need for proportionality and the over-arching principles of EU law, but since the case of C-140/12 Brey so has the Court of Justice of the European Union itself.

She writes that an exclusionary and punitive legal environment contributed to a default of administrative complexity, obstruction and suspicion. The growth of the application form for permanent residence to a mind-blowing 85 pages in length illustrates the point perfectly. Normalisation of delay and “refuse first, ask questions later” further undermine the effectiveness of the right to reside.

The groups most disadvantaged by the dismantling of what citizenship rights there were are women, children and the disabled. Lone parents, carers and poorly paid and exploited workers all face potential exclusion from the right to reside which is in effect a pre-condition to the benefits of EU citizenship. They face exclusion from the social safety nets.

Free movement is a right conferred by EU law on all citizens of the Union. The assault led by UK politicians on the principle of free movement has transformed it into a luxury enjoyed only by the economically privileged and destroyed the principle of equal treatment irrespective of nationality.

After trashing the house, the UK has now flounced out. It remains to be seen whether the damage done can be repaired the morning after.

O’Brien does not directly address the UK referendum result; the book is not about that. Implicitly, though, O’Brien suggests that the ideological hostility of politicians towards EU citizens and EU free movement law led rather than followed public hostility. A more rights-based approach and more generous public dialogue might have led to a different result.

As the title of the book makes plain, O’Brien urges EU law-makers and judges to reconsider the market citizenship model before it is too late.