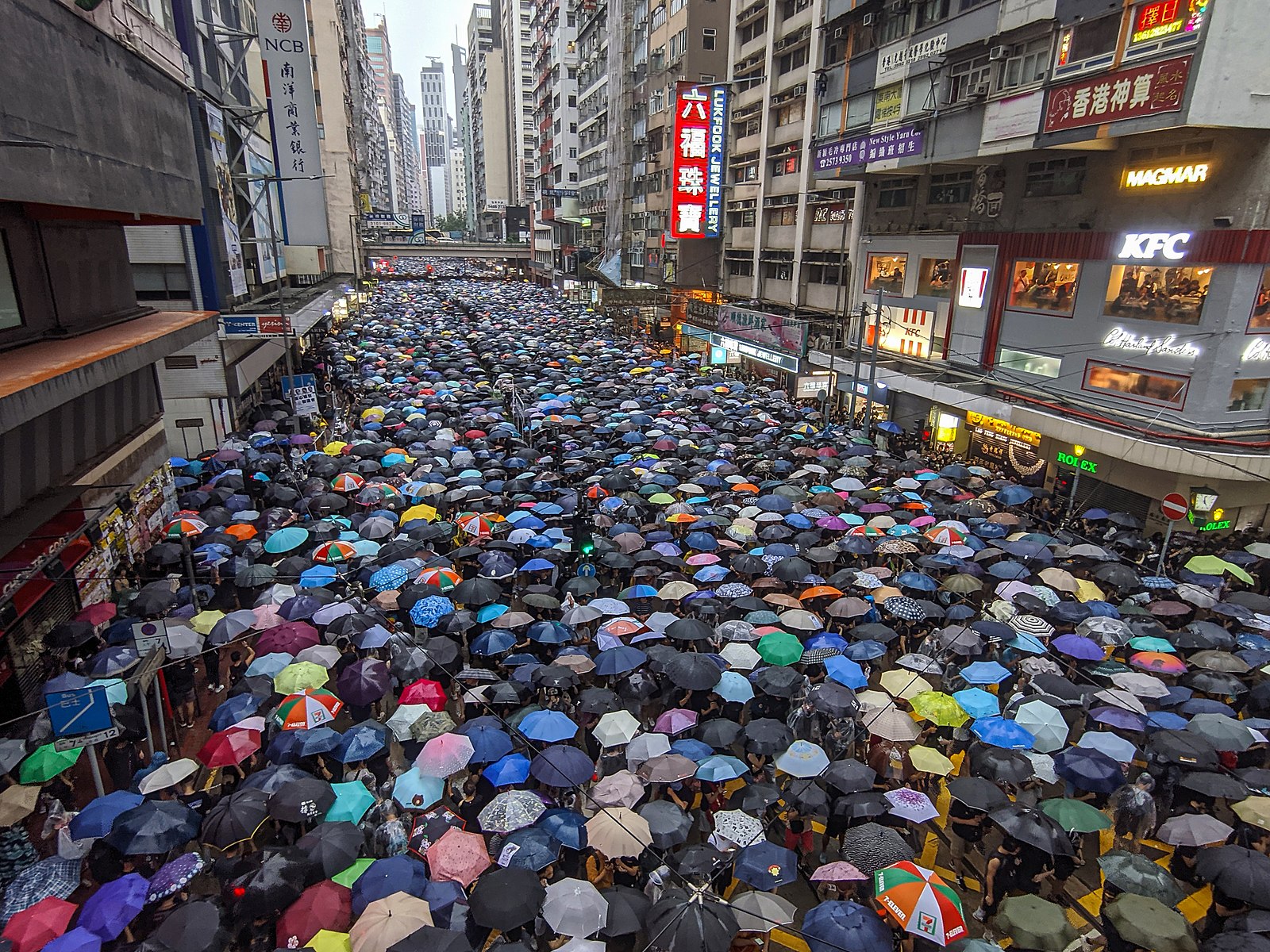 As fears of Chinese retaliation against the pro-democracy movement in Hong Kong grow, so does public scrutiny of the nationality status of citizens of the former colony: British National (Overseas) status, commonly abbreviated to ‘BNO’.

In this briefing we take a closer look at this relatively obscure British citizenship status held by an estimated 3 million people in the mid 1990s. Worth noting is that despite the large number of people who had or still have BNO status, as at the end of December 2015, there were only 143,200 valid BNO passports in circulation. As we regularly point out in this blog, a passport does not confer a citizenship status; a passport is merely a travel document.

The comparatively small number of BNO passports in circulation is far more likely to be a simple reflection of just how useless a status it really is (for other useless British nationality statuses, check out British Overseas Citizenship). The actual number of people who hold BNO status is probably far higher than the number of passports issued.

Of the above, the majority of residents of the United Kingdom will have British citizenship. The other statuses are remnants of Empire and are becoming increasingly obscure. British Nationality (Overseas) status would normally count as obscure but has been in the news recently because of the protests in Hong Kong, so we thought we would put out an explainer.

Some quick background on Hong Kong

Hong Kong is situated on the southeast coast of China. It is made up of three main areas: Hong Kong Island, Kowloon, and the New Territories.

Hong Kong first came under British imperial control when Britain invaded in 1841 to utilise its strategic location for military purposes. Hong Kong Island became a colony in 1842 after the First Opium War. Kowloon was acquired after the Second Opium War in 1860. Finally, the New Territories were acquired in 1898 through a lease agreement between Britain and China, allowing full British control over the increasingly influential region for a finite period of 99 years. Those 99 years came to an end in 1997, when formal control over the entire Hong Kong region was returned to China.

Hong Kong is now one of China’s Special Administrative Regions, and since the handover, residents have been entitled to their own “HKSAR” passport. Prior to handover, the majority of Hong Kong residents would have been classed as British Dependent Territories citizens with a right of abode in Hong Kong only (not the UK). In the ten years leading up to handover, they were entitled to apply to register for BNO status. Many did, either to retain their connection to the UK, or simply because this was their only way to obtain a passport at that time. BNO status was created on 1 July 1987 by the Hong Kong Act 1985 and the Hong Kong (British Nationality) Order 1986 as part of the provisions for the ending of British sovereignty and jurisdiction over Hong Kong.

BNO status was an entitlement, but had to be acquired by registration. Acquisition was not automatic. The final deadline for registration for most people was 1 July 1997, though for some it was extended to 31 December 1997. BNO status thus belongs only to a closed, and naturally declining, group of people. Anyone who missed the deadline for registration cannot retrospectively apply for this type of nationality status, despite any historic eligibility.

To qualify for BNO status, a person had to be a British Dependent Territories citizen by connection with Hong Kong. Those who did not register for BNO status and had no other nationality or citizenship on 30 June 1997 automatically became British Overseas Citizens on 01 July 1997.

Crucially, BNO status does not confer the right of abode. Holders therefore do not have any automatic right to live or work in the UK and are subject to immigration controls just like all other non-EEA nationals.

For the purposes of European Union law, BNOs are not considered to be UK nationals and thus cannot avail themselves of free movement. The words ‘European Union’ have never appeared on the front cover of BNO passports (unlike British citizen passports, which only stopped using those words on 30 March 2019).

For visit purposes, BNOs are considered to be non-visa nationals, though if you are a BNO hoping to visit the UK and take advantage of the fancy new e-gate admission system then think again. That privilege has not been extended to BNOs. On 18 April 2019 Stuart McDonald MP submitted a written question to the (then) Immigration Minister Caroline Nokes, who advised that this would be considered. Stuart McDonald MP confirmed yesterday that there was no news of any such consideration:

Hi John, have heard nothing further. Will ask again.

One small advantage for a BNO is that one year after acquisition of indefinite leave to remain or settled status, he or she will have an entitlement to register as a British citizen under section 4 of the British Nationality Act 1981 (subject to usual residence requirements) instead of having to apply for naturalisation at discretion. This is a slightly cheaper application, and removes the element of discretion that naturalisation applicants must face.

Why no right of abode?

The right of abode is a fundamental aspect of citizenship statuses around the world. It’s therefore fair to ask why, if BNO status does not confer the right of abode, what the point of it was at all? Well there certainly were calls for full British citizenship with the right of abode, especially from Governor Patten himself. These calls were not heeded however, for reasons which I believe to be (but stand to be corrected on) twofold: firstly and perhaps obviously, the UK government feared the potential for a sudden influx of over 3 million new British citizens and was worried about the difficulties of “absorbing” that many new arrivals into society. Secondly, it was argued that to extend full citizenship would threaten Hong Kong’s stability and prosperity, thus contravening the 1984 Sino-British Joint Declaration on Hong Kong.

So why bother creating BNO status at all? Full answers will likely be found in Hansard, however the short answer is that the UK created BNO status to allow people who previously held British Dependant Territories citizenship to elect to retain their connection with the UK if they wished, even after the handover to China.

What does the future hold for BNOs?

Despite brave calls from Tom Tugendhat, Chair of the Commons foreign affairs committee, for an urgent ‘upgrade’ of BNO status to full British citizenship, the cynic in me sees that as very wishful thinking. BNO status is but one example of how the UK massively let down former citizens of the colonies (for other examples, see Windrush and CUKCs stripped of the right of abode following the Commonwealth Immigrants Acts, Malaysian British Overseas Citizens, Chagos Islanders, to name but a few instances). I became aware when researching this article that BNO status has since come to be known as ‘Britain Says No’ in reference to Britain saying no to full citizenship with right of abode for Hong Kong citizens.

Our government is currently failing to manage the status of its 3 million plus EEA citizen UK residents. The offer of a mere 50,000 grants of full British citizenship at the time of handover was enough to cause a stir with China (side note – the British Nationality (Hong Kong) (Selection Scheme) Order 1990 may have been one of the first points-based systems on record?); the thought of the UK causing a fresh diplomatic crisis with China by now extending full British citizenship with the right of abode to a potential 3 million BNOs is, regrettably, unlikely. In response to a 2018 petition calling for the government to give full British citizenship to BNOs, the government responded on 12 December 2018 to confirm that

There are no plans to amend the law in this respect.

Whilst the recent pro-democracy demonstrations and troubles post-date this petition, I would be very surprised if the position were departed from in the current climate.