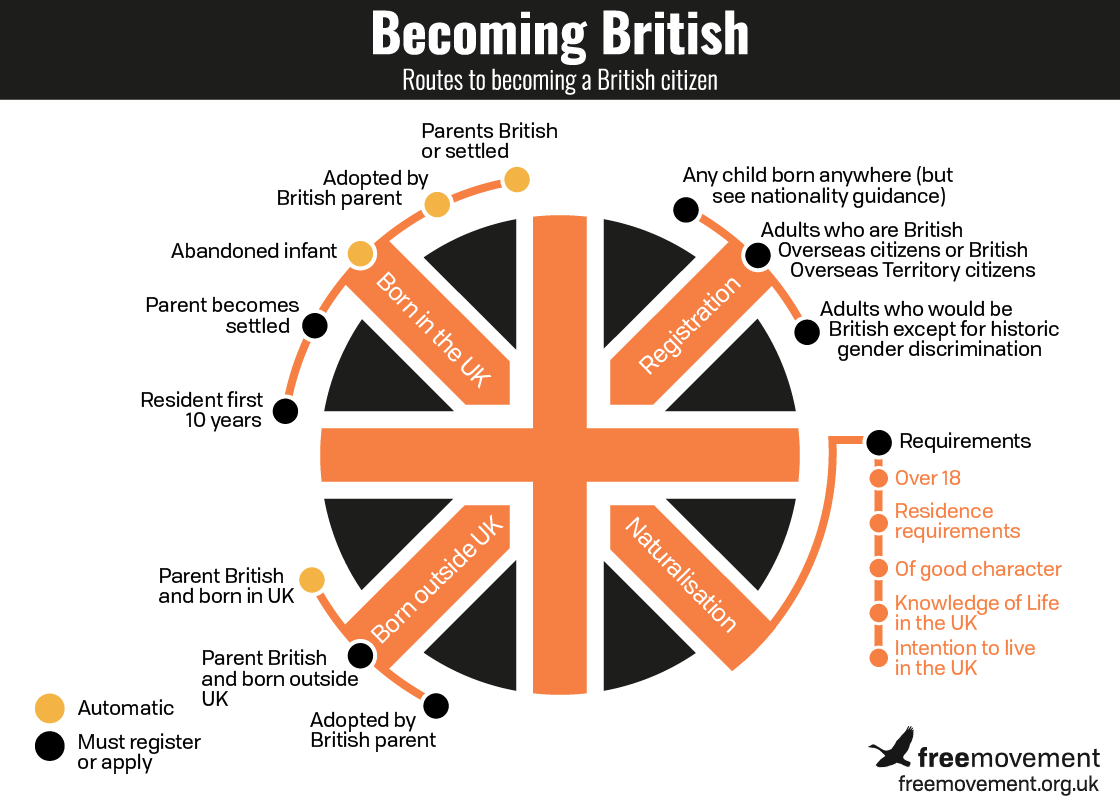 British by descent: when the child of a British citizen is not themselves British

A story hit the news over the weekend of two-year-old Lucy, the child of British parents who has been told by the Home Office that she must leave the UK. It is always difficult to comment on news stories without knowing the full facts but it is certainly true that a child born abroad to British citizen parents who were themselves born abroad is not automatically British at birth. Of course, that is no excuse for writing to a toddler to tell them to leave the UK, particularly when the same toddler might well be eligible to become British by being registered as a British citizen.

In this post, we’ll explain how it is that a child born to British parents might not be British herself, and what can be done about getting her citizenship. It is partly adapted from our training materials on British nationality. I am grateful to John Vassiliou for his input on both the article and the training course.

There are lots of ways to become British, as our infographic below shows. The vast majority of British citizens have acquired their citizenship automatically by birth. We also sometimes call this way of becoming British “by operation of law” because it happens automatically under the British Nationality Act 1981 without the parent or child having to do anything.

A child can be born British by operation of law in one of two ways:

That said, proof that a person meets the criteria for automatic acquisition may be required in order to prove citizenship and to obtain a British passport. Typical proof would include the child’s full birth certificate (not an abbreviated version) showing the parent(s)’ names and evidence of either the child’s mother or father’s settled immigration status or British citizenship at the time of the birth.

Clare was born in the UK in 2010. Her father, Colin, is a British citizen so Clare was automatically born a British citizen. She has never travelled abroad and Colin has not applied for a passport for her yet.

If or when he does apply for a passport for her (or if or when she does herself as an adult) he will need to submit proof that she qualified for British citizenship at the time of her birth.

Birth within the United Kingdom

Since 1 January 1983, being born in the UK is not by itself enough to be automatically born British. At least one of the child’s parents must also be settled in the UK at the time of birth.

A person born in the United Kingdom after commencement, or in a qualifying territory on or after the appointed day, shall be a British citizen if at the time of the birth his father or mother is–

(a) a British citizen; or

(b) settled in the United Kingdom or that territory.

being ordinarily resident in the United Kingdom or, as the case may be, in that territory without being subject under the immigration laws to any restriction on the period for which he may remain.

Effectively this means that the parent in question must have a settled immigration status, such as:

The “settled status” being offered to EU citizens who wish to stay in the UK after Brexit counts as a settled immigration status. Legally speaking, it is a species of indefinite leave to remain.

It would not be enough, however, to be born to a parent living in the UK with a visa which grants only limited leave to remain. Children born to such parents are not automatically British citizens.

There are also special rules on children born before 1 July 2006 to an unmarried British father, for children of members of the armed forces, for adopted children and for abandoned children, which we will not go into here.

Birth outside the United Kingdom

A British citizen by descent cannot automatically pass citizenship to a child born outside the UK. This seems to be what has happened with two-year-old Lucy, who was born in South Africa to British citizens by descent. The legal reason for it is section 2 of the 1981 Act:

(a) is a British citizen otherwise than by descent…

There is a more detailed definition of who is a British citizen by descent in section 14 of the 1981 Act.

Ultimately, it makes sense that a form of citizenship will only be passed down a certain number of generations. At the time of the introduction of the British Nationality Act 1981, Thatcher’s government intended for citizenship to be passed down a further generation. This part of the legislation was amended as the Bill passed through Parliament. The government as a consequence introduced the UK Ancestry visa to enable work then settlement in the UK for those who had a grandparent born in the UK. But that is not much help to a toddler, because applicants must be aged 17 or over.

A child born abroad to British by descent parents (the yellow box in the flow chart above, and reportedly little Lucy’s situation) may be entitled to registration as a British citizen under sections 3(2) or 3(5) of the 1981 Act.

Registration under section 3(2) requires one of the child’s parents to be British by descent and to have lived in the UK for a continuous period of three years (with 270 absences from UK allowed during that period) at some point prior to the child’s birth. That parent must also have a British citizen otherwise than by descent parent (i.e. the child’s grandparent must be British otherwise than by descent). If a child meets the criteria set out in section 3(2) then the child will be entitled to be registered as a British citizen by descent.

Registration under section 3(5) seems very similar to section 3(2). But under section 3(5), the relevant three-year period of residence in the UK must have occurred at some point after the child’s birth and must include not just the British by descent parent but also the child.

This will generally require the child to have moved to the UK with the parent and have a visa during this time. There is however no requirement for the child to have a British otherwise than by descent grandparent. If a child is registered under this rule, the child will become a British citizen otherwise than by descent, so, if the facts of the case allow it, objectively this is a better option.

If a child doesn’t fit into the section 3(2) or section 3(5) criteria, it is still possible to apply under section 3(1) of the 1981 Act for the child to be registered as British at the discretion of the Home Secretary. In this section we’ll give an overview of how that works, but if you are reading this and thinking about applying for your own child, just be aware that it’s a complex area and reading the full policy referred to below and/or instructing a lawyer to help might be wise.

Unlike the other registration applications, there is no entitlement to registration under section 3(1). Such an application involves putting a case to the Home Office and asking for the child to be made British. A very wide discretion is afforded in these cases and all cases will be considered on individual merits, but generally that discretion will be exercised in line with published policy.

Caseworkers considering discretionary applications under section 3(1) must take into account the child’s:

Going back to Lucy’s case again, let’s say (we don’t know from the news reports) that she were ineligible to apply under section 3(2) but is considering section 3(1). With a two-year old child brought to the UK as a visitor by British by descent parents, a caseworker considering whether or not to exercise discretion to register the child will be particularly interested in the child’s immigration status. The policy states that

As a general principle, the expectation is that there should be a staged approach to permanent residence and citizenship. This means that the child will first achieve one of the following before being considered for British citizenship:

Given this you should normally only register a child under section 3(1) who has not been granted IL or permanent residence where there are strong compelling compassionate circumstances to do so. British citizenship does not give a minor any additional benefits that cannot be obtained through IL and therefore representations on the basis of issues such as access to education are unlikely to be sufficient to justify the exercise of discretion.

Being free from immigration restrictions will be less important where one or both parents are British citizens who have come to the UK to live permanently and:

So registration is clearly not a foregone conclusion in cases like this, even where both parents are British. Registration under section 3(1) doesn’t exist to enable circumvention of the “staged approach” to citizenship set out above. The cynical amongst us might say that the Home Office would like to receive its hefty £2,389 indefinite leave to remain fee first before allowing the family to fork out the registration fee of £1,012 as well.

The published policy also covers a very wide array of other circumstances in which children can be registered under section 3(1), including adopted children, children born to a parent registered under section 4C, 4G, 4H, 4I of the 1981 Act, and children of unmarried partners. We won’t cover those here, but would just repeat the caveat that all this can be fairly complicated and this post doesn’t capture every detail.

How to submit an application for registration

Applications under sections 3(2) and 3(5) have specific evidence that must be submitted, whereas applications under section 3(1) are a lot more freeform, with the onus, as always, being on the applicant to make their case. In section 3(1) cases, applicants should read through all of the Home Office’s published policy very carefully and perhaps consider taking specialist advice before proceeding, because at a non-refundable £1,012 plus biometric enrolment fees, registration applications do not come cheap.

What if none of the registration options are suitable?

There will be times where none of the registration options are suitable and none will lead to British citizenship for the child. In those cases, where the parents are British by descent, it will normally be possible to apply for indefinite leave to enter the UK if the child is abroad, or indefinite leave to remain in the UK if the child is in the UK. Such applications are made under paragraphs 297 or 298 of the Immigration Rules.

My thanks to John Vassiliou of McGill & Co. for his input on this article.