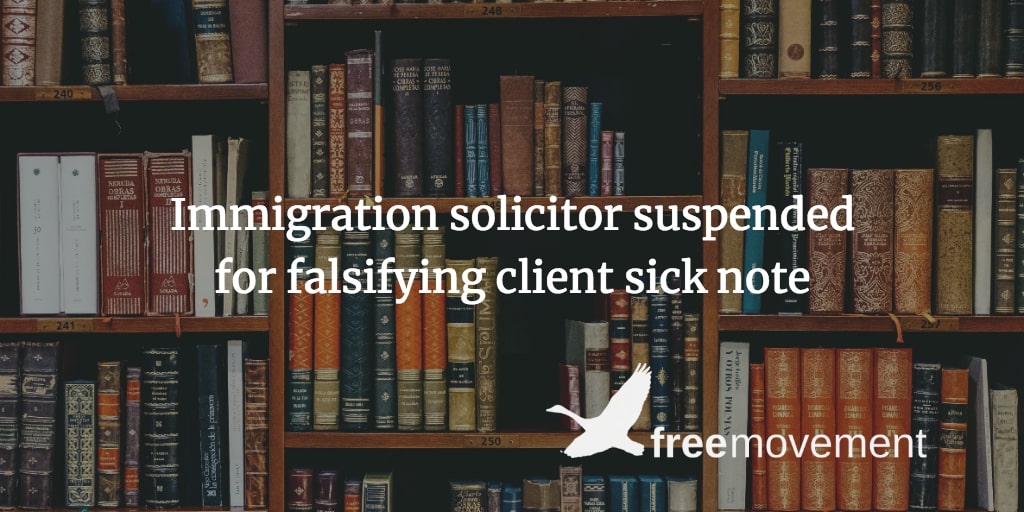 An immigration solicitor has been suspended indefinitely for forging a sick note for the tribunal.

The Solicitors Regulation Authority (SRA) alleged that Sandia Kumari Pamma had not properly prepared for a child client’s asylum appeal and “decided to falsify a sick note that she had obtained from another client file” in a bid to get the appeal adjourned.

The attempt to hoodwink the tribunal unravelled quickly, as the child was at the hearing and confirmed that he was not sick.

At the time Ms Pamma, a solicitor with ten years’ experience, was working for Duncan Lewis Solicitors as a non-practising consultant. It appears that Duncan Lewis promptly referred Ms Pamma to the regulator upon learning about the doctored note.

At the Solicitors Disciplinary Tribunal, Ms Pamma admitted falsifying the sick note and telling both Duncan Lewis and the immigration tribunal that her client was sick when she knew that to be untrue. She also admitted instructing another lawyer to appear before the tribunal to press for the adjournment.

But the disciplinary panel found Ms Pamma “an honest witness who gave straightforward and credible evidence” and demonstrated “full and frank cooperation from the first point of challenge”. It accepted medical evidence that she had been suffering from a depressive episode at the time, saying that

the Respondent’s judgement was impaired at the time as a result of the medical condition from which she was suffering and the cumulative effect of the extremely difficult circumstances she had described.

In light of this “truly compelling and exceptional personal mitigation”, the tribunal imposed an indefinite suspension for dishonesty instead of a striking off.

In addition for her past work with Duncan Lewis, Ms Pamma also runs a firm called City Law Immigration in her capacity as an OISC immigration adviser. Solicitors suspended from practice can and do work as OISC advisers, as the two regulatory regimes are separate.