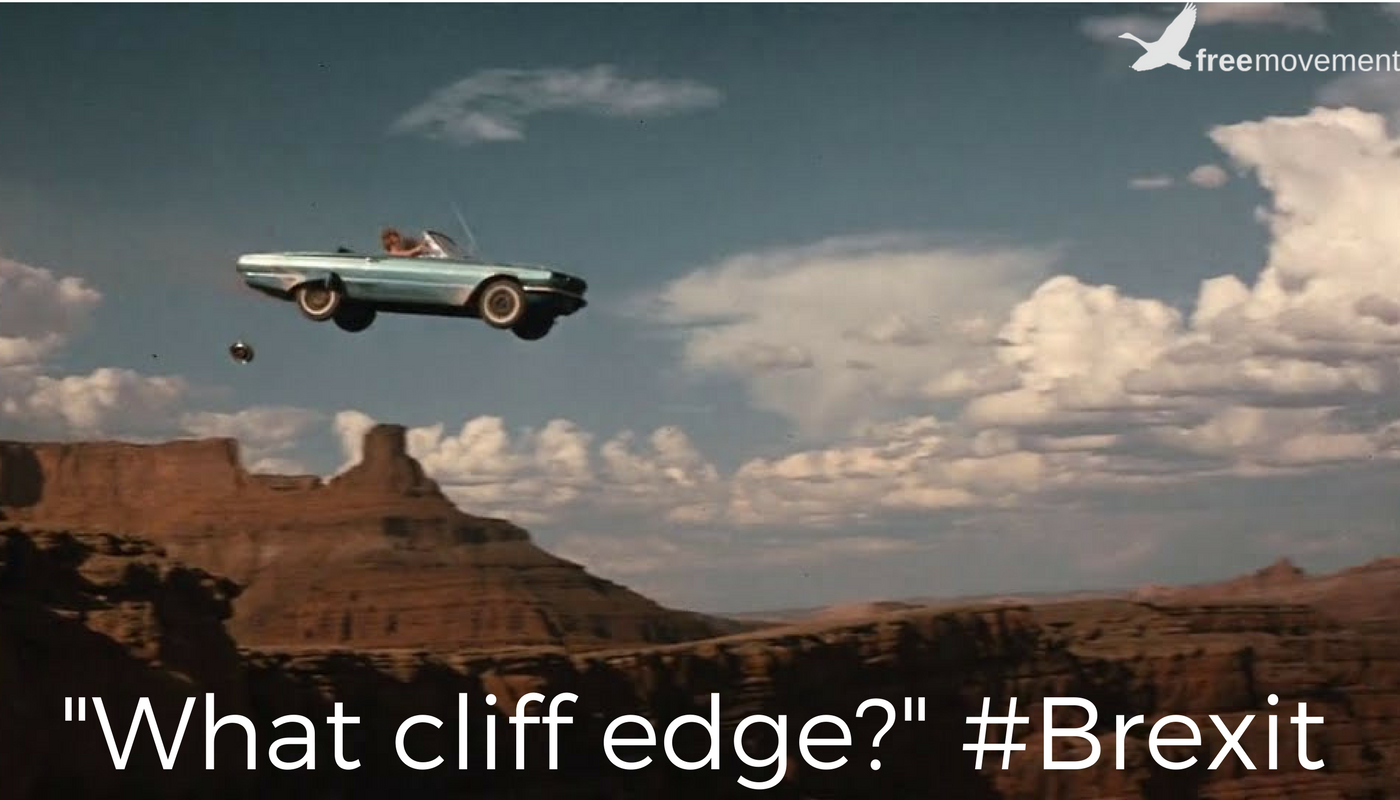 Forget “hard Brexit” and “soft Brexit”. The leaked proposals for a post-Brexit immigration system suggest the pedal is already to the metal for full Thelma & Louise Brexit.

The Brexit to-do list is the length of a constantly unravelling ball of string. One of the many items on that list is deciding what the post-Brexit immigration system will look like. Yesterday we caught a glimpse of recent thinking at one of the key departments responsible, the Home Office. Essentially, those responsible for the 82 page proposal, dated August 2017, want to sever ties between the UK and EU.

There are concessions in the paper. It is accepted that different rules should be applied to EU citizens compared to other migrants, at least to begin with. The full bureaucracy of the Points Based System and Appendix FM for family members would not be brought immediately to bear, for example.

The proposals would torpedo the evolved, mature and enabling system of free movement of labour, though. The paper is explicit about ending a rights based approach. EU citizens arriving after Brexit would have to show passports, not ID cards, would have to apply for short term two year visas for low skilled jobs, would be subject to an income test, would be prevented from bringing some family members and would be committing a criminal offence if they worked or resided in breach of the new tighter rules. Employers, landlords, banks and others would have to carry out “papers, please” immigration checks. The “hostile environment” Theresa May worked so hard to create as Home Secretary would apply to EU citizens.

There are four major problems with the proposals.

The first and most obvious is that the plans would make the UK a far less attractive destination for migrants. This is of course the whole point. The Home Office is protectionist by nature and worries only about security. The economy, consequent tax take, international relations and “soft power” international standing are considered worth the sacrifice. But what would happen to the sectors of the economy dependent on migrant labour, such as agriculture, food processing and hospitality? Are the public ready for a huge recession, massive job losses and reduced funding for public services and infrastructure?

The nostalgia faction take inspiration from The Italian Job, the “will-they-won’t-they” cliff edge ending to which might be seen as a parable for the current Brexit debate. An old sector based scheme can be brought out of retirement for one last mission. They rely on their nationalistic faith in the inherent desirability of the UK as a destination. With the pound devalued, the UK economy growing slower than any other in the EU and only short term visas explicitly based on privilege not rights on offer, it is doubtful that migrants would see things the same way. A Latvian looking for work boning chicken breasts or picking asparagus is not driven by nostalgia but rather makes informed choices on maximising income and opportunities.

2. It works both ways

The second problem is that what goes around comes around. Similarly restrictive rules, or worse, would inevitably be applied by the EU to British citizens wanting to travel to, work or reside in the EU in future. This clearly interferes with retirement plans held dear by some Brits, makes it harder for young people to study or work in the EU and creates potentially existential barriers to service industries already facing stiff competition from within the EU. These issues would all exacerbate the effects of the recession brought about by a severe reduction in migrant labour.

The third issue is that the proposals suggest implementation immediately on Brexit. This would make any status quo transitional arrangement with the EU impossible. Over the next few months businesses will have to decide whether to implement their contingency plans for a “Hard Brexit” and this paper suggests that they should assume the UK is pursuing the unambiguous Thelma and Louise option.

Fourthly — and perhaps this is just for the pedants and lawyers like me — the proposals are based on provably incorrect assumptions. For example, the paper bemoans that there is “virtually no limit” to the supposed rights of supposedly infinitely extended family members under current free movement laws. In fact the UK is only obliged to “facilitate” entry subject to national laws and can subject such family members to enhanced scrutiny. Free movement is described as “unconditional” but this is false. The paper suggests that current EU migrants do not make all UK residents richer, contrary to all the reputable evidence on this question.

These sort of falsehoods and inaccuracies are always irritating in a Government paper. In the context of deciding a future immigration system, something that is of vital importance to our future, they are potentially disastrous.

This blog post is a slightly altered version of a piece that was first published in the New Statesman.