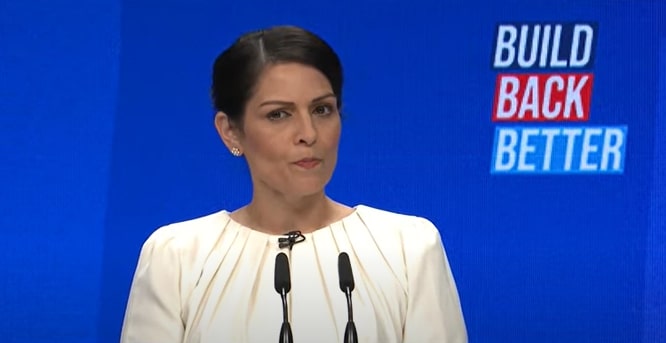 About half of the Home Secretary’s speech to the Conservative Party conference today was given over to immigration and asylum, but there were no new policy announcements. In fact it was, in structure, tone and content, much like last year’s effort: free movement is dead; work visas for the “best and brightest”; asylum system still broken; too many appeals; people smugglers evil; Labour Party worse; Channel crossings will be stopped; foreign criminals, criminals, criminals.

Patel did confirm “new sea tactics, which we are working to implement to turn back the boats”. This presumably refers to Border Force jet skis seen drilling in the Channel. Colin has a briefing out today unravelling the many international laws mandating sea rescue; more on the legality of such tactics under UK domestic law to follow soon. Given the legal and operational difficulties, some expectations management was sensible: pushbacks alone “cannot solve this problem” and doing so “will take time”, Patel conceded.

The speech also contains a sustained attack on “the legal process. If an asylum claim is rejected, there is nearly always an automatic right to appeal. And no surprise that everybody appeals”. It is just as well that they do, given that almost 50% of asylum appeals succeed. Despite this rhetoric, Patel did not propose any additional attack on appeal rights beyond that already contained in the Nationality and Borders Bill.

We have finally ended free movement. Delivered on our new points based immigration system, welcoming people to our country based on the skills they have to offer, and not on the colour of their passport. Our new routes are attracting the best and the brightest talent from around the world, welcoming brilliant scientists, the finest academics and leading people in their fields, all helping to drive our economy forward as we build back better from the pandemic. And at long last, the British immigration system is under the control of the British government.

Despite what we have already delivered, we must be honest with ourselves about the long standing problems that we still face. We owe it to our country to continue confronting the difficult issues, no matter how controversial or complex they may be, taking action on difficult decisions that have stumped politicians for too long. All states have a responsibility to control their borders. Where there is a door, there must be a doorkeeper. What is happening in the Channel with small boats is unsafe, unfair and unacceptable.

From the vast camps outside Calais, mainly of male economic migrants, to the shocking images of people crammed into flimsy boats crossing the Channel, exploited by people smugglers. Vile criminals, characterised by ruthlessness and greed, who even threaten to drown small children, just to line their pockets. This cannot continue. Which is why we are going after the criminals behind this perilous trade in people smuggling.

And then of course, there is the legal process. If an asylum claim is rejected, there is nearly always an automatic right to appeal. And no surprise that everybody appeals, even if the decision to refuse asylum is upheld, there can be yet another appeal, right up until the possibility of further appeals at the Supreme Court and the Court of Appeal. And if that fails, the claimant, and the lawyers can start a fresh claim. And then, even when seated on a plane their lawyers can still block their removal.

Now, Britain’s asylum system might have worked 20 years ago. But not now. The system is collapsing under the pressures created by these parallel illegal routes to asylum facilitated by smuggling gangs. Labour would have you believe that the capacity of our asylum system is completely unlimited. But the very presence of economic migrants through these illegal routes is undermining our ability to support those in genuine need of protection.

To that I say no. Our system must uphold our reputation as a country where criminality is not rewarded, but where playing by the rules is.

My New Plan for Immigration is already making its way through Parliament. And at the heart of this plan is a simple principle: control. That is not unreasonable. Through our New Plan for Immigration, Britain will be fair, but firm. And we will continue to be outward facing, and provide sanctuary to those in need through safe and legal resettlement routes. From Uganda to Syria, Hong Kong to Afghanistan, under Conservative leadership, the United Kingdom will always hold out the hand of friendship to those most in need. Which is why I established a new resettlement route for Afghans fleeing persecution, prioritising women and girls. And we will always support the brave men and women of our armed forces who served in Afghanistan, and continue to keep us safe around the world.

Standing by the world’s most vulnerable, we will prioritise those who play by our rules over those who seek to take our country for a ride. For the first time, how somebody arrives in the United Kingdom will impact upon how their asylum claim is processed. Our new one stop shop will tackle the multiple claims and appeals which frequently frustrate removals, and our new laws will speed up the removal of those with no legal right to be in our country.

I know from the briefings that I receive from our intelligence and security agencies that there are people who attempt to come into our country to do us harm, plotting to strike at our very way of life. And I shall continue to fight with every ounce of my breath and my being to uphold the safety and the security of our nation.

With all of this, we will continue to pursue joint solutions to joint problems. France is a safe country, not one riven by war or conflict. There is no reason why any asylum seeker should come to the United Kingdom directly from France.

I make no apology for securing our borders and exploring all possible options to save lives by ending these horrific journeys. Which is why, right from the start, Boris and I have worked intensively with every institution with a responsibility to protect our borders. Border Force, the police, the National Crime Agency, maritime experts – and yes, the military – to deliver operational solutions, including new sea tactics, which we are working to implement to turn back the boats.

Whilst this represents progress, a single measure alone cannot solve this problem. We must stay the course, and see this whole New Plan for Immigration through. It will take time. But I can tell you now, I will continue to take the difficult action needed to address this long standing issue.

And what’s worse is that they do not care about ensuring that the victims of crimes committed by foreign national offenders can rebuild their lives, safe in the knowledge that attackers are no longer here. Labour MPs — some of whom even sit with the Leader of the Opposition at his Shadow Cabinet table — shamefully campaign to halt the removal of murderers, rapists and child abusers. Criminals who have caused untold harm and devastation on our soil, including to women and girls. While they busy themselves writing letters defending these convicts, this Home Secretary will always put the rights of victims first.

And with that, we have removed nearly 8,500 foreign national offenders from our country.

This last statistic, incidentally, is the cumulative total from the start of 2019 into the first quarter of 2021. The annual number of foreign criminals removed has in fact fallen every year since 2016 (with 2020 and 2021 to date obviously affected by the pandemic).

And there’s one other big change the public want to see. Too often they see dangerous criminals abusing human rights laws.

In one case, a drug dealer convicted of beating his ex-partner, a man who hadn’t paid maintenance for his daughter, then successfully claimed the right to family life to avoid deportation.

Conference, it is absolutely perverse that someone guilty of domestic abuse could claim the right to family life to trump the public’s interest in deporting him from this country. We’ve got to bring this nonsense to an end.

So, today I can tell you that, under this Prime Minister and before the next election, we will overhaul the Human Rights Act to end this kind of abuse and restore some common sense to our justice system.

It is rather a throwback to 2015, when Colin was writing about “Dominic Raab MP, now the Minister responsible for replacing the Human Rights Act”. The case that Raab mentions is even more of a throwback: it appears to be a reference to the decade-old decision in AP (Trinidad & Tobago) [2011] EWCA Civ 551. Suffice to say that much deportation law reform has flowed under the bridge since then.

An expert group chaired by former Court of Appeal judge Peter Gross is already reviewing the Act and “intends to deliver its Report to the Lord Chancellor by the end of October 2021”.