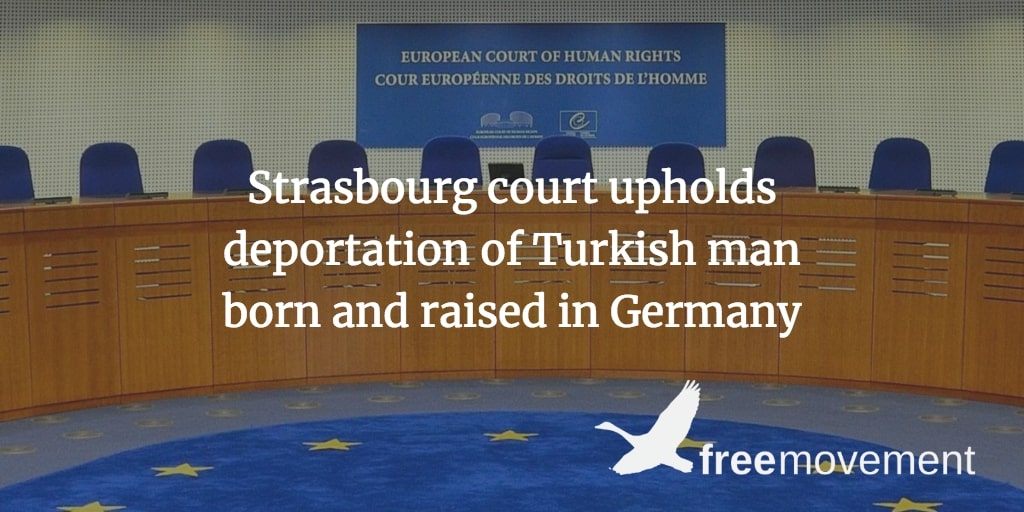 In Cabucak v Germany (application no. 18706/16), the European Court of Human Rights dismissed a strong Article 8 claim to uphold a deportation order made against a serial drug-dealer.

Mr Cabucak, who despite being a Turkish national was born and raised in Germany, has a tragic life story. His father killed his mother when he was two years old. He has a German daughter and successfully appealed against a previous deportation order in 2005. Unfortunately, Mr Cabucak continued to commit criminal offences and therefore the German authorities made a second deportation decision in 2008 which was upheld by the domestic courts.

The European Court of Human Rights agreed with the German authorities that deportation was a proportionate response to Mr Cabucak’s offending. It accepted that there would be some negative impact on his daughter and noted that he had only been to Turkey on two brief holidays as a child, but this was not enough for him to succeed under Article 8:

In the light of the above, the Court recognises that the domestic courts carefully balanced the competing interests and explicitly took into account the criteria set out in the Court’s case-law. Moreover, having regard to the gravity of the drug-related criminal offences committed by the applicant, and considering the sovereignty of member States to control and regulate the residence of aliens on their territory, the Court finds that the interference was supported by relevant and sufficient reasons, and was proportionate in that a fair balance was struck between the applicant’s right to respect for his private and family life, on the one hand, and the prevention of disorder or crime, on the other hand. In these circumstances the Court concludes that the interference with the applicant’s right to private and family life as protected under Article 8 § 1 of the Convention was justified under Article 8 § 2 of the Convention.

This case is an example of the wide margin of appreciation accorded to member states when the European Court of Human Rights considers whether deportation is a disproportionate interference with Article 8. Applicants who fail before domestic courts are extremely unlikely to succeed in Strasbourg unless they can demonstrate that something has gone completely wrong in the proportionality assessment.