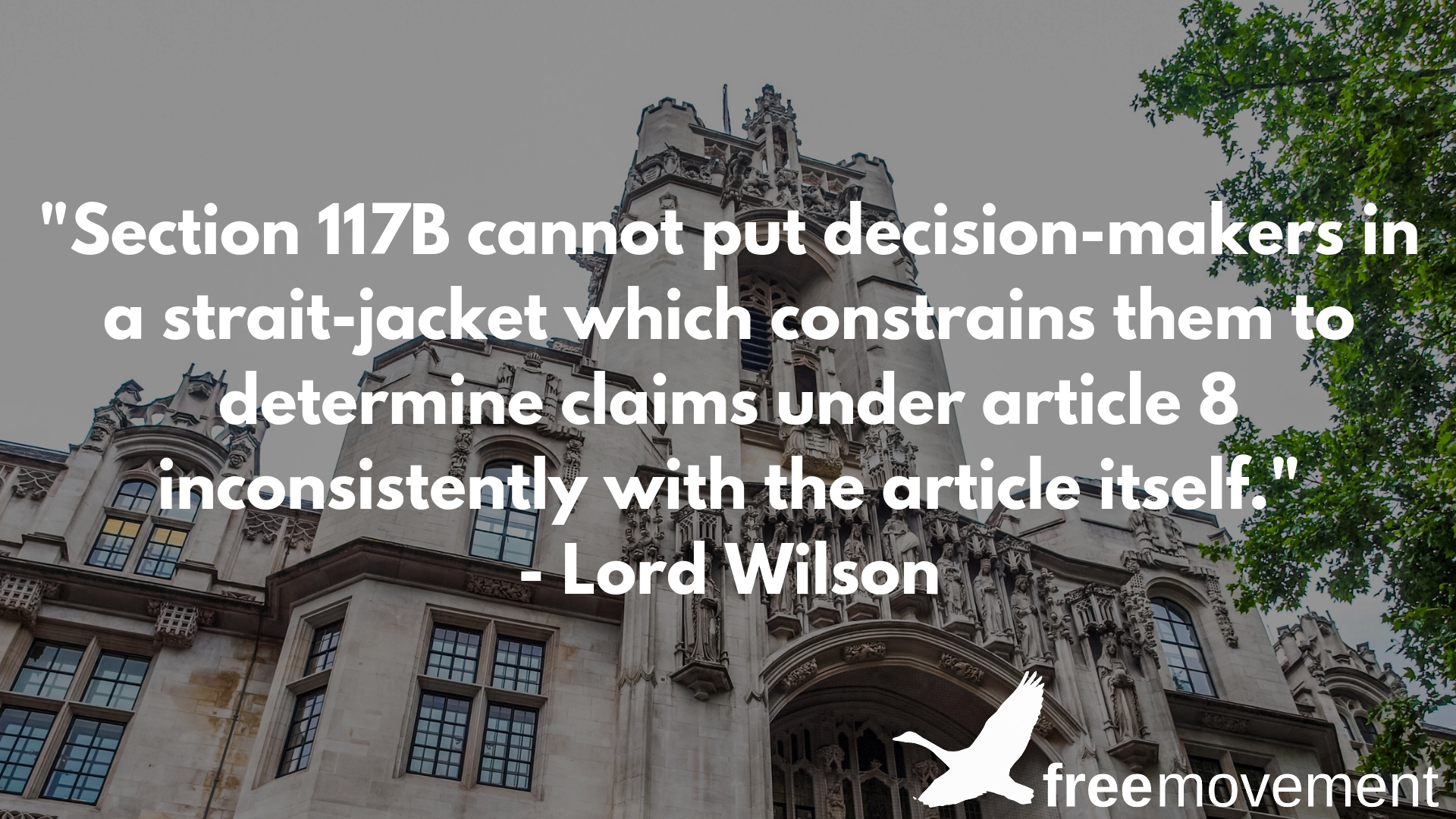 The Supreme Court has allowed the appeal in the case of Rhuppiah v Secretary of State for the Home Department [2018] UKSC 58. Giving the sole judgment, Lord Wilson holds that a “precarious” immigration status is any status short of Indefinite Leave to Remain but allows the appeal on the basis that “financial independence” means not having recourse to public funds.

Ms Rhuppiah first entered the UK over twenty years ago, in September 1997. She entered lawfully as a student and she remained as a student for over ten years, until the end of November 2009. She applied for Indefinite Leave to Remain on the basis of her strength of residence, but that was refused on the basis of short periods of overstay between applications caused by the inept college which handled her extension applications. Her appeal against the refusal ultimately failed. She remained unlawfully in the UK from 11 October 2010.

She applied again on 1 July 2012, an application which was seemingly based on 14 years of residence, whether lawful or unlawful. The application was made on the wrong form and she had to apply again on 8 August 2012. However, the old 14 year rule had just been abolished at that point in a major set of rule changes on 9 July 2012. She did not qualify at that time under the new 20 year rule and her application was refused.

Astute readers will note that as of September 2017, Ms Rhuppiah had been present in the UK for 20 years. The Secretary of State noticed that too, and happily for her Ms Rhuppiah was granted leave on this basis earlier this year. It will be yet another ten years before she qualifies for settlement, but at least her position is lawful now. Nevertheless, her appeal continued on the basis that it was important for the Supreme Court to decide the questions of law which arose.

Aside from her long residence, Ms Rhuppiah had also argued that she now acted as carer for a close friend from her student days, Ms Charles, who suffered from ulcerative colitis, a gravely debilitating condition, and was heavily dependent on Ms Rhuppiah. Ms Rhuppiah also regularly saw her brother and his family, who lived nearby.

Ms Rhupppiah appealed but her appeal was dismissed at the First-tier and Upper Tribunals and at the Court of Appeal.

The meaning of the word “precarious” is important because of section 117B(5) of the Nationality, Immigration and Asylum Act 2002 as amended:

Little weight should be given to a private life established by a person at a time when the person’s immigration status is precarious.

This statutory presumption was introduced by the Immigration Act 2014 and imposed on judges deciding immigration cases. It means that where a person has a status which is precarious, it will be very hard for them to succeed on human rights grounds unless the requirements of the Immigration Rules are met.

In an earlier tribunal case, AM (S 117B) Malawi [2015] UKUT 260 (IAC), the tribunal held that “precarious” in this context meant any lawful status short of settlement. The tribunal went on to suggest that even settled status or citizenship might be considered precarious if that status was revocable by the Secretary of State as a result of their deception, or because of their criminal conduct.

In the Court of Appeal, Sales LJ had taken a more generous approach (it’s not often you’ll see me writing that), holding that an immigration status leading to settlement might not be considered precarious and that an evaluative approach was needed.

The Supreme Court prefers the bright line approach of the tribunal in AM Malawi:

The answer to the primary question posed by the present appeal is therefore that everyone who, not being a UK citizen, is present in the UK and who has leave to reside here other than to do so indefinitely has a precarious immigration status for the purposes of section 117B(5).

Although not making a definitive finding, Lord Wilson goes on to suggest the tribunal was also correct to comment that settlement and citizenship might be considered precarious for the purpose of section 117B where the status was revocable because of deception or criminality.

However, a person with no immigration status at all does not fall within section 117B(5) because he or she has no status at all. Such a person’s position is determined not by s.117B(5) but instead by s.117B(4) instead.

Lord Wilson then turns to another provision within section 117B of the Nationality, Immigration and Asylum Act 2002. This time it is subparagraph (3):

It is in the public interest, and in particular in the interests of the economic well-being of the United Kingdom, that persons who seek to enter or remain in the United Kingdom are financially independent, because such persons –

(a) are not a burden on taxpayers, and

(b) are better able to integrate into society.

Ms Rhuppiah had no recourse to public funds and was fully supported by her friend, Ms Charles. Nevertheless, Judge Blundell had held that did not amount to financial independence. The Court of Appeal agreed, rejecting the argument that a person was financially independent for the purpose of section 117B(3) if the person was not financially dependent on the state.

financial independence in section 117B(3) means an absence of financial dependence upon the state.

Duty on judges to “have regard”

The statutory presumptions at section 117B are not necessarily determinative in all cases, Lord Wilson is at pains to point out. It is section 117A(2)(a) which requires judges to “have regard” to the considerations in section 117B, and this allows some flexibility:

the provisions of section 117B cannot put decision-makers in a strait-jacket which constrains them to determine claims under article 8 inconsistently with the article itself. Inbuilt into the concept of “little weight” itself is a small degree of flexibility

Some cases might therefore still succeed even though the person concerned has a precarious immigration status:

Although this court today defines a precarious immigration status for the purpose of section 117B(5) with a width from which most applicants who rely on their private life under article 8 will be unable to escape, section 117A(2)(a) necessarily enables their applications occasionally to succeed.

But when? Lord Wilson describes the conclusion of Sales LJ that there were no particularly strong features of Ms Rhuppiah’s private life as “at first sight slightly surprising” but then goes on to say that because the appeal was now academic the court would not explore that issue further. This does leave open the possibility that Ms Rhuppiah might conceivably have succeeded on her (very strong) facts.

Indeed, at the conclusion of the judgment Lord Wilson comments that had Judge Blundell properly understood the meaning of “financial independence”, section 117A(2)(a) “might properly have led him to uphold her claim, for which he had obvious sympathy.” The actual outcome of the appeal to the Supreme Court was that the decision of Judge Blundell to dismiss the appeal was set aside.

Finally, Lord Wilson also finds that the statutory considerations do not act as positive considerations, confirming earlier and lower authorities on this issue. Where a person is financially independent (see below) and can speak English, for example, these do not become presumptions in their favour. Being financially independent and being able to speak English may well be relevant considerations outside the scheme of the rules, but within the statutory scheme they do not carry a public interest in their favour.

Notably, First-tier Judge Blundell’s determination was described by Lord Wilson as “a determination of conspicuous clarity and sensitivity”. Judge Blundell will be well known by many professional readers of this website from his time as a Presenting Officer and more recently as a barrister then judge and it is good to see him receiving praise at the highest level.

Also notably, this decision represents another example of a judgment on immigration issues by Lord Justice Sales in the Court of Appeal — who is shortly to be Lord Sales of the Supreme Court — being overturned in the Supreme Court. This time part of his judgment was considered too generous, part too restrictive and his overall conclusion on the facts “slightly surprising.”