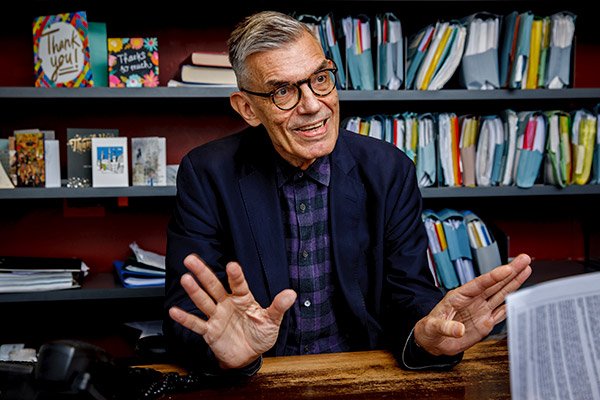 On 13 October 1997, the new Labour government published a document on family visas. It was called the Concession Outside the Immigration Rules for unmarried partners and it was a legal landmark. The concession allowed certain foreigners in the UK to apply for leave to remain on the basis of a relationship with someone they weren’t married to — and, crucially, covered same-sex relationships. Looking back many years later, one immigration lawyer involved in pressing for the change remarked that

it represented – so far as I have been able to ascertain – the very first time ever in the British legal system that same-sex couples were legally recognised.

That lawyer was Wesley Gryk, who retires today — his 71st birthday — from the firm that bears his name. It is the end of, to borrow the title of a talk Wesley himself once gave, a superlative “queer career in law”. We at Free Movement thank him profoundly for his work and wish him a long and happy retirement.

Originally from the United States and a graduate of Harvard Law School, Wesley first moved to London in 1980 to work for UNHCR, the UN agency for refugees. From there he moved to Amnesty International, where he worked full-time between 1981 and 1986 but maintained his links with the organisation thereafter, representing Amnesty as an observer at the trial of Saddam Hussein in 2005.

It was after re-qualifying as a lawyer in England and Wales that Wesley began to push for recognition of same-sex relationships in the immigration system. In 1992, a few years after completing a training contract at what is now Birnberg Pierce, he met two gay friends — a couple called Bill and Javier — for lunch.

According to Wesley’s own account (well worth reading in full for anyone and essential reading for those interested in the history of immigration law and lawyers): “Bill and Javier fairly early on in the course of the afternoon provided proof – if proof be needed – of the old saw that ‘there is no such thing as a free lunch’”. They wanted Wesley to apply for a partner visa for Javier, a Peruvian citizen. At the time, unmarried straight couples who had been living together for as long as Bill and Javier could apply for leave to remain on that basis. But same-sex couples, in the era of Section 28, could not.

What those few cases had in common was not, however, wildly encouraging:

many, very possibly most, of them were granted – rather cynically – on the basis that the foreign applicant was the partner of a gay male suffering the effects of serious HIV-related symptoms and that the presence of the foreign partner as a carer would reduce the costs of such cases to the NHS and Social Services in caring for the British-based partner until his death.

To make a convincing, universally applicable breakthrough took some extra-legal lobbying. A productive Stonewall Group meeting with Mike O’Brien QC, then shadow Home Office Minister, in 1996 was followed by a commitment to address the issue from Shadow Home Secretary Jack Straw in the run-up to the 1997 election. As Wesley describes the moment of victory:

finally, on 10 October 1997 the unmarried partners concession was announced, which recognised same-sex relationships. It was the very first legal recognition of same-sex couples in British law.

By now Wesley had left Birnberg Pierce. He opened Wesley Gryk Solicitors LLP on 6 February 1995, renting “three rooms over a Balti House” on The Strand. The firm moved to Lower Marsh near Waterloo Station in 2000 and now has around 20 staff. It has maintained its reputation in LGBT+ family and asylum cases while expanding into other areas of law. I am enormously grateful for the contributions of Nath Gbikpi, of that parish, to Free Movement over the past few years. She is the epitome of Wesley’s aim, as once expressed to the Law Society Gazette, to produce “all-rounders in the field of immigration”.

Although he steps back from partnership today, the firm says that Wesley will continue to contribute to its work as an unpaid consultant. We at Free Movement wish him and all at the firm well for the future.