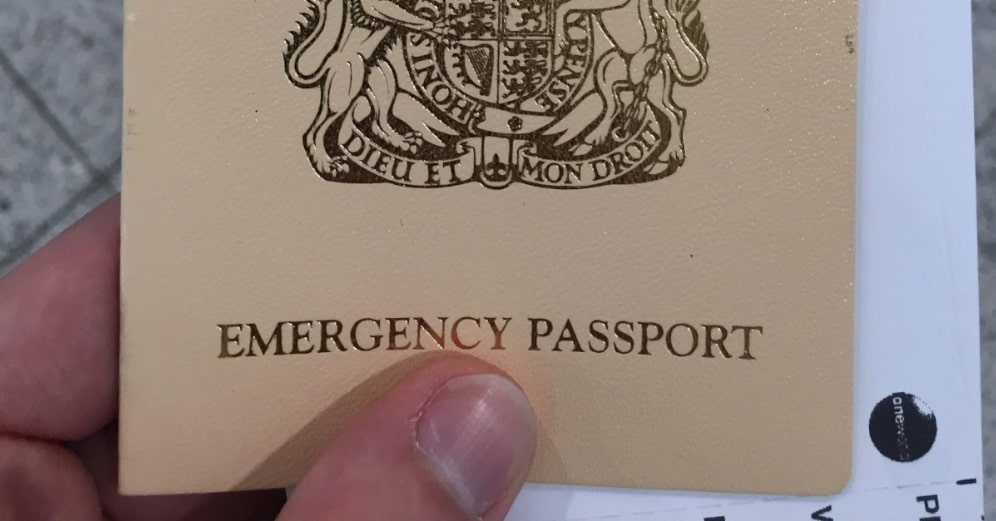 What to do if you lose your British passport abroad

You’ve just had a fantastic summer holiday in, let’s say, Greece — away from the daily grind, the misery of Brexit and British summertime weather. Sunshine every day, beach swimming, late nights, great wine, even better food. You’re basically 90% gyros by this point, but it’s all right, it’s a holiday.

It’s been a long day but you’re finally at the airport (let’s say Thessaloniki). Typical airport in the summer, massive queues, but never mind, we Brits are great at queuing.

You reach the check-in desk. The lady at the desk asks for your passport and boarding pass. Damn. You were sure it was in your pocket. Maybe it’s in your luggage. A chill is slowly but surely spreading down your spine as you empty the contents of your luggage on the floor, dirty laundry and all.

Check all the pockets of all the clothes. Still not there. Spine is well and truly frozen at this point.

Plane departs in under two hours. Lady at the desk insists you can’t travel without a valid travel document. You offer a driving licence and a winning smile. She’s not into it, and you know fine well that it’s not a travel document so there’s no point pressing that any further. What next?

Getting home without a passport

Even as someone who spends their professional life dealing with immigration problems, it can be very daunting being stranded abroad. (If you hadn’t guessed already, I’m speaking from very recent experience.)

If your British passport has been lost or stolen abroad and you’re in a hurry to get home, then the only option is to try to secure a one-way emergency travel document from the British embassy and use that to get yourself home on a new flight. You can also apply for a new passport, but doing so will take at least a few weeks and that’s really no use to your average distressed holidaymaker.

What is an emergency travel document?

An emergency travel document is issued to enable a person stranded abroad without a passport to get home. It is basically a temporary substitute for a passport, but valid only for a specific journey. The UK’s government website says this:

You can use an emergency travel document to travel to your destination through a maximum of 5 countries. You can also normally use it to return to the country you’re applying from if you live there.

I have to confess that as an immigration lawyer who has advised clients within the UK to obtain emergency travel documents from their home country in order to voluntarily depart, I’d never actually seen one. As it turns out, the British version is creamy ivory coloured thin passport-like document with just a very small number of pages, giving it a suitably flimsier feel compared to a regular passport: 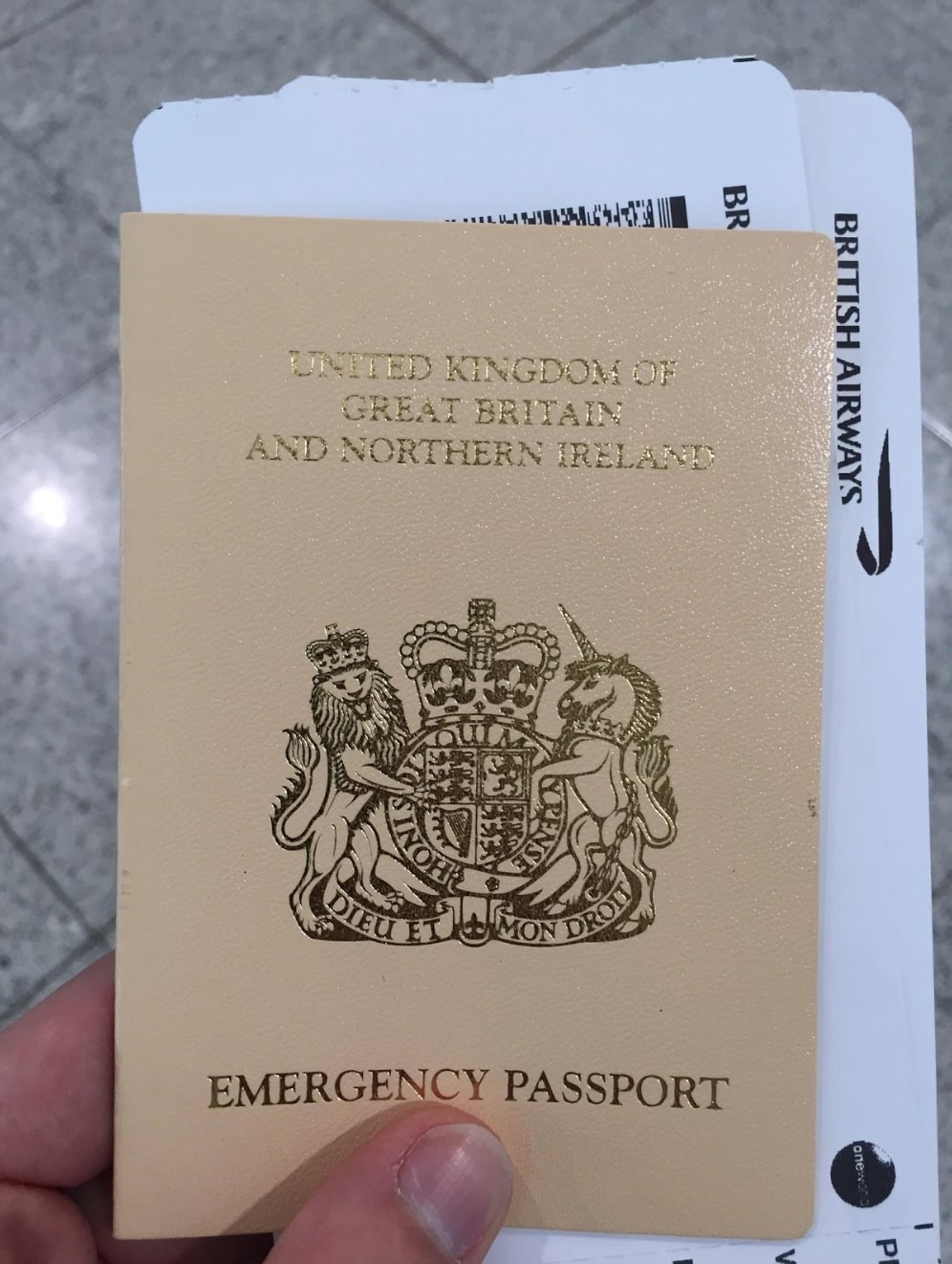 How do you apply for an emergency travel document?

I don’t normally praise the UK government’s border processes but it’s remarkably easy to apply for a British emergency travel document. I thought I would have to phone the embassy or attend in person for an interview, but it’s all done online. The Foreign Office digital people are enormously proud of this, describing it as “unambiguously the best website the Foreign and Commonwealth Office has ever released”.

That said, I’m going to open with some advice in all caps because it’s really, really important: ALWAYS HAVE A SCAN/PHOTO/COPY OF YOUR PASSPORT, BANK CARDS AND DRIVING LICENCE AVAILABLE AND ACCESSIBLE. This is because the emergency travel document application asks for all your passport details and has to be paid for online or over the phone, which will be tricky if your cards are lost along with your passport. I recommend storing this information on your phone (for offline access) and in your emails (for online access).

After inputting personal details and explaining what happened to your passport, you will receive repeated warnings that by progressing to the next screen, even if you don’t ultimately complete your application, your passport will be cancelled anyway. Even if it turns up, it cannot be used. This is the main bit that gave me pause for thought. What if the passport had just fallen out of my pocket and some kind soul handed it in the next day? Time to cut it loose and commit!

After progressing to the next screen you will need to upload a selfie adhering to passport photo rules or upload a recent passport photo if you’re the kind of person who hangs onto those. Assuming you’re taking the selfie route, brace yourself: nobody is going to look great at midnight after a lost passport ordeal.

You will then be asked to upload evidence of your travel plans (be it future or missed plans — I uploaded a screenshot of my boarding pass for my now missed flight from Thessaloniki to Edinburgh).

I also came across a few suggestions that I may be asked for proof of reporting of loss/theft to the local police. I didn’t have this at the time and just wanted to get home, so I was grateful to be able to complete the application without having to upload something like this. If they were to call me later and ask, I would deal with it.

You will be asked where you want to collect the document from. There may not be a convenient location, though. In my case, despite Thessaloniki being the second most populous city in Greece with over one million inhabitants, the Foreign Office closed its consular presence there in 2013 in what seems to be an effort to cut costs. It was either one of the surprisingly plentiful vice-consulates on the various tourist islands (I’m guessing lads on tour tend to lose documents), or the British Embassy in Athens, the only option on the mainland and some 500km south. Athens it is.

Last but not least comes payment. Weighing in at £100, an emergency travel document is more expensive than a full-blown British passport, but I guess that’s the price you have to pay to see bonnie bonnie banks of Loch Lomond once more.

Once the application is submitted, you get a confirmation email. Normally it should take up to two working days to process if all goes well. If not, they will contact you for further information.

I submitted my application at around midnight on a Tuesday and by 11am on the following day I had received an email confirming that my emergency travel document was ready and would be waiting for me to collect in person at the British embassy in Athens. The embassy only opens for collection of documents on Mondays, Wednesdays and Fridays between 10am and 1pm so I had to wait an extra day before I could collect the document.

Do you need to get a police report?

Although I hadn’t been specifically asked for one, the mentions of potentially needing one prompted me to file a police report and ask for a copy.

There was only one police station in the entire city of Thessaloniki where I could report a lost/stolen passport. A Romanian couple in front of me in the queue had had their wallets and passports stolen from their car. They hadn’t kept a scan or copy of their document details and so I watched them get turned away and told to go to the Romanian embassy (which I can only guess is in Athens, 500km away) to find out their exact passport and licence details, then come back to file a report. Bet they wished they’d kept a handy scan!

Police report in hand, I was reassured that if necessary I could satisfy the Foreign Office that I had reported the loss, and can hopefully claim some reimbursement from my travel insurance.

Most travel insurers require you to report loss or theft to the police within 24 hours. When you’ve been the victim of crime in a foreign country the absolute last thing you really want to do is wait around a police station to file a report but it’s important to just get it done. It’s not as painful as it sounds.

As it transpired, the embassy did not ask for my police report. I can bet my insurance company will, though.

Collecting the document and travelling home

Collecting the document from the embassy was painless. The Greek security staff and administrators, whose English was fluent, were very polite, friendly, and welcoming at all times.

To get past the security check and into the grounds of the embassy I had to state my name and my business, then provide proof that I was indeed invited to collect an emergency travel document. I was asked to show the email I had received. No problem for someone with a charged phone on them, but one to bear in mind if you are not a technophile or if you are always running low on battery.

With the email to hand, I was in and out in about ten minutes and couldn’t be more complimentary about the service. Perhaps I’m reaping the benefits of the costs saved by the outsourcing of visa processing, which used to take place at consulates and embassies.

The document itself is valid for seven days from the date of issue, although if you have specified a travel plan it may be tied to that. I didn’t specify a travel plan when I applied for mine, following the age-old immigration lawyer advice of not booking travel until your document has been issued.

The document bears an endorsement stating that it replaces my previous passport (it provides the full passport details) which was declared lost and that it is only valid for arrival in the United Kingdom within the limited seven-day period of validity. At the UK border, the document will be scanned and then retained. And that’s you, home and dry.

1. Apply online for an emergency travel document. It will help immensely if you have a note of your passport details to hand.

2. File a police report within 24 hours.

3. Wait for the email confirming that your travel document has been issued. Don’t book a return flight until you have that confirmation.

4. Bring a copy of the email (electronic is fine) to the nominated embassy or consulate to collect your travel document.