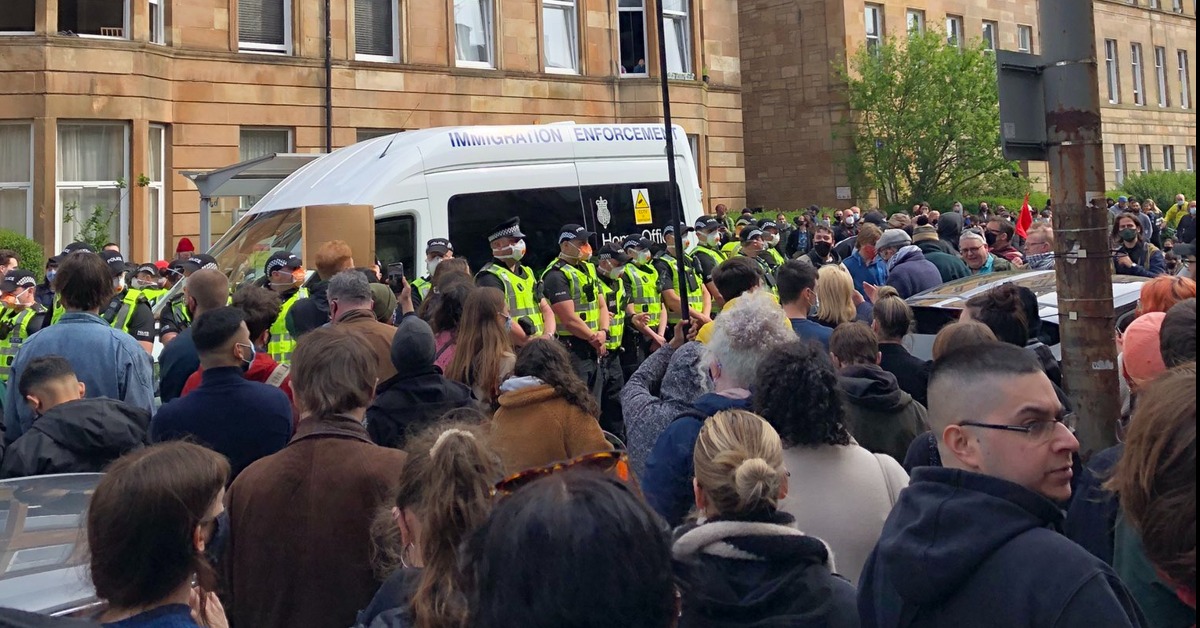 Credit: @BuchananMirren on Twitter
18th May 2021  By CJ McKinney
Hubs / Enforcement / Anti-raids activism: what is t ...

The scenes in Glasgow last week, which saw a crowd prevent Immigration Enforcement from making off with two Indian men, got us thinking about the criminal offence of obstructing an immigration officer.

Not, we hasten to add, because we think anyone should face charges over what’s seen in many quarters as a heart-warming display of community activism.

In fact, despite the existence of organised anti-enforcement groups in several parts of the country, hardly anyone is ever prosecuted for trying to stymie immigration raids.

A person shall be guilty of an offence…

(g) if, without reasonable excuse, he obstructs an immigration officer or other person lawfully acting in the execution of this Act.

Between 2013 and 2019, just five people in England and Wales were charged with this offence, according to Home Office data. Of the four people convicted, one received a conditional discharge and the others fines of between £150 and £200. It is possible, though, that activists could be charged with a different, more generic offence depending on what exactly they get up to.

Groups like the Anti Raids Network tend to give advice about how to make life difficult for immigration officers while staying on the right side of the law. Their literature suggests activities such as filming the officers and advising those being questioned that they don’t have to answer questions and can leave if not under arrest.

But it’s fair to say that they also contemplate more direct interference like that witnessed in Pollokshields on Thursday. The Haringey Anti-Raids group tells its social media followers that “physically obstructing officers may put you at risk of arrest for obstruction: BUT this is a minor offence”.

How to resist an immigration raid pic.twitter.com/1JkmyMWBBM

Two of the group’s members found themselves among the unlucky few prosecuted for obstruction following an incident on Green Lanes last year. Immigration officers driving away from a shop felt that their vans were being deliberately blocked, and took the protestors into custody. But last November, a judge at Highbury Corner Magistrates’ Court threw out the case, ruling that the pair had no case to answer.

“The solicitors came up with what they thought was quite an ambitious defence. They weren’t that confident about it working”, one of the activists told Free Movement. The tactic was to focus on the “lawfully acting in the execution of this Act” bit of section 26(1)(g) and to argue that the prosecution had not established that the officers were so acting at the time, given that they were driving away from the scene and (as it turned out) had nobody in the van.

“What they said was that the prosecution didn’t provide any evidence of what the officers were actually doing in that particular moment when they were allegedly obstructed”, the activist recalls. “They could have been driving back to Becket House, they could have been on their way to another raid, but the prosecution had no evidence to show that they were exercising a particular power”.

Raj Chada of Hodges Jones & Allen, the lead defence solicitor, confirmed that the successful argument was “there are very defined powers in the Immigration Act” and “obstruction can only take place if you obstruct an officer exercising those powers (i.e. not just an immigration officer acting generally)”. He says that includes situations where, as often happens, officers have got the person’s consent to enter their home or ask them questions, rather than by invoking their Immigration Act powers.

If that interpretation were to catch on, it could have serious ramifications for Immigration Enforcement’s ability to go about its business — especially if the Glasgow protests give rise to more outbreaks of activism.

Is that likely? The Haringey activist reckons that conditions in Pollokshields were unusually favourable for mass action, with many residents off work for Eid, reports circulating of similar raids in the area very recently and his own group having delivered a workshop for local activists just a few days before. There have also been suggestions that such activity, while wildly popular with people who use the word “intersectionality” a lot, is more likely to provoke a reaction among more small-c conservative voters.

But those who do feel inspired to create a little Kenmure Street of their own may take comfort in the fact that obstruction charges are both rare and — as the Haringey case shows — potentially tricky to make stick.