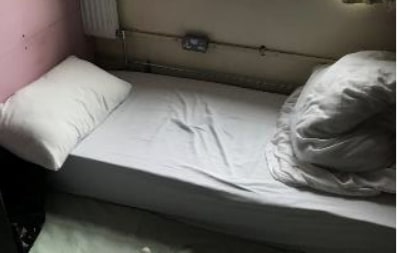 It’s not the most damning part of yesterday’s inspection report on the asylum seeker camp at Napier barracks, but it’s certainly the most ironic. Some of the staff charged with running the camp were themselves migrants working in breach of their visa conditions, according to the Independent Chief Inspector of Borders and Immigration.

In a letter to the Home Office appended to the report, the inspector says that

when the [inspection] team visited Napier on 17-18 February they found that some employees were living onsite in squalid and unsafe accommodation and were seemingly working in breach of their student visa conditions. When I visited on 4 March, I was told that these individuals were no longer working for the sub-contractor as they were not willing to reduce their hours.

The Home Office did not respond to this allegation when contacted by Free Movement. It is true that these were not civil servants, but staff hired by a private company engaged to run the camp on the department’s behalf. But the arm’s-length nature of the facility is part of the problem: the running of the camp was delegated to an outsourcing company, which hired sub-contractors, which in turn hired sub-sub-contractors. The report is scathing about:

The document published yesterday is a full-length version of an emergency interim report first issued on 8 March. Napier and Penally are not detention centres: they are “contingency asylum accommodation”, provided on the same legal basis as the hotel rooms previously provided. Residents are supposedly free to come and go. It is telling, then, that the report was carried out by the prisons inspector on behalf of the immigration inspectorate. The former wrote of his reaction:

I joined the team at Napier and was shocked as much by the shambolic governance and haphazard commissioning of the site by the Home Office as I was by the totally unsuitable accommodation.

Many of the report’s findings are familiar from the interim report and the High Court’s equally scathing judgment last month. The former military facilities were crammed full of asylum seekers contrary to the advice of public health authorities, making a coronavirus outbreak (as occurred at Napier) “virtually inevitable”. There were “serious concerns about fire safety” and “many areas were filthy”. Virtually all the residents reported depression and “there was inadequate support for people who had self-harmed”. And so on, and on.

Penally, the site in Wales, has now closed but Napier remains open with over 100 residents as of this week. The Home Office is committed to opening more such facilities, albeit purpose-built: the New Plan for Immigration promises “new asylum reception centres to provide basic accommodation and process claims”.

In response to the report, the Home Office outlined improvements in living conditions since the inspectors visited and said that nobody should have to live at Napier for more than 90 days in future.