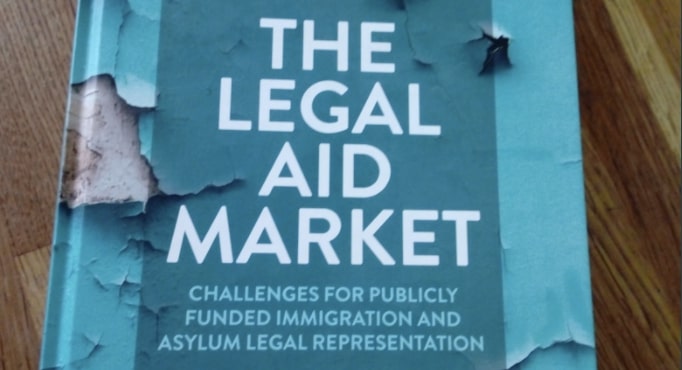 There are only two things that legal aid lawyers can do to mitigate the losses they inevitably face by undertaking publicly funded advice work: reduce the time they put into each fixed fee case, or reduce the number of legally aided cases they take on.

This is the stark finding of Jo Wilding’s excellent study of the economics of modern day legal aid lawyering. It will come as absolutely no surprise to anyone working in publicly funded immigration and asylum law.

Lawyers offering advice to clients on a legally aided basis will very regularly not be paid for all of the work they undertake on a case, and sometimes not even for most (or, occasionally, any) of it. Where it is paid, the rate is a fraction of the amount they would expect to be paid if instructed on a private basis, and kryptonite for cash flow.

The system, finds Wilding, is set up to reward those who do the least amount of work possible in any given case, driving down quality. One does not have to look far to see the consequences of this policy, with the level of legal aid advice provided to immigration detainees described as “shambolic” only the other week.

It has led to fewer and fewer practitioners able to operate as legal aid lawyers, with good firms having to reduce the amount of work they undertake in order to minimise their losses. In all areas of the country, the supply of legal aid providers comes nowhere close to demand, with many counties having no publicly funded immigration and asylum advice at all.

Practitioners are steadily leaving the market, but it is the absence of the next generation of legal aid lawyers that is the really serious concern. With more indebted students, and fewer firms offering training berths, only the very committed or the personally subsidised can afford a career as a legal aid lawyer.

It is as painful as it is fascinating to read Wilding’s study alongside ILPA’s 2003 response to the government’s consultation on changes to legal aid. These outcomes were predicted:

The effect of the proposals will be to restrict very significantly the availability of high-quality publicly funded advice and representation in immigration and asylum cases. It is clear from consultations with ILPA members that many of the most knowledgeable and conscientious representatives will simply cease to operate in the sector, or will severely reduce their caseloads.

And so, almost twenty years later, here we are.

There are those who simply say that the government ought to properly fund the immigration and asylum legal aid system, where poor representation can kill.

In reality, there is not the political will to do this. The current administration’s distaste for publicly funded immigration and asylum lawyers is well known. But even the left wing of the Labour Party was unable to promise (2019 manifesto, page 47) to properly fund the legal aid system. The current Labour position appears to involve some sort of pro bono arrangement with the City to fill in the gaps, which makes about as much sense as me offering advice on tax law one afternoon a month.

With the coffers empty after the pandemic, it is difficult to see this position changing in the next decade. Besides, one does not get the impression that those who operate the current legal aid framework accept there is really much of a problem, or care a huge amount for the quality of representation afforded to “end user” clients. Nor does it seem to bother the authorities that the current system does not remunerate lawyers to the extent necessary for them to be able to continue to do this work for long (if it didn’t, says the Legal Aid Agency, why are lawyers still bidding for contracts when tendered?).

Wilding’s study offers some suggestions on changes to the current system to give providers some respite. But even she acknowledges that these changes would only tinker at the edges.

A recent report by the Westminster Commission on Legal Aid concluded that legal aid is “not sustainable”. It recommends, among other things, an independent fee review panel like that already in place for NHS doctors and dentists. The Justice Committee of MPs has similarly urged “urgent reform”, with its own wishlist of priorities. As Wilding’s book shows, though, the demonstrable collapse of access to justice is no guarantee of government help.