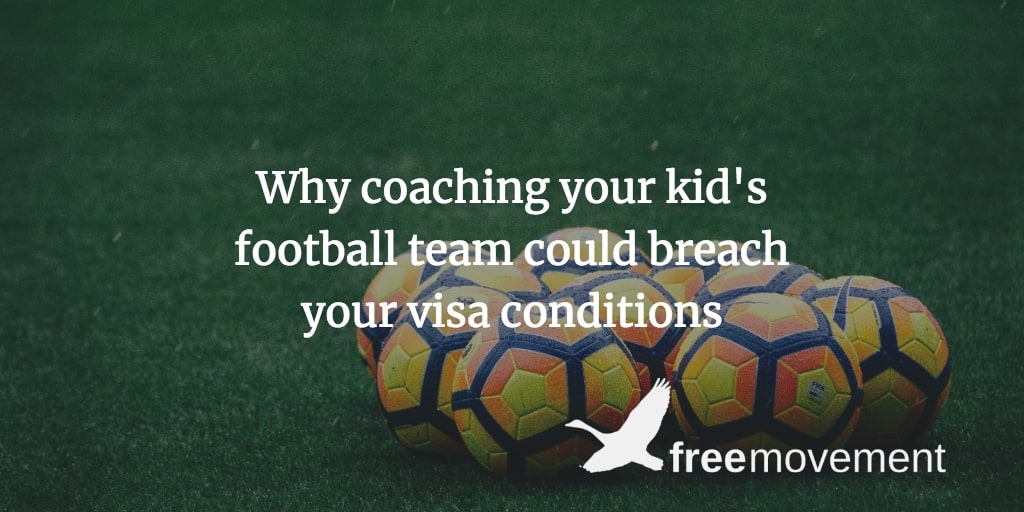 Add to favorites
Hubs / Points Based System / Why coaching your kid’s ...

For reasons that don’t appear to have been explained anywhere, at least not that I can find, the Home Office has made significant changes to the definition of a professional sportsperson.

This is important because a prohibition on performing activities as a professional sportsperson is a condition of most UK visas.

Anyone who breaches a condition of stay risks having their leave to remain in the UK curtailed and may also find that future UK immigration applications are refused.

What is the new definition?

New Immigration Rules came into force on 10 January 2019. The new definition, contained in paragraph 6, states that:

A “Professional Sportsperson”, is someone, whether paid or unpaid, who:

1. is currently providing services as a sportsperson, playing or coaching in any capacity, at a professional or semi-professional level of sport;

2. is currently receiving payment, including payment in kind, for playing or coaching that is covering all, or the majority of, their costs for travelling to, and living in the UK, or who has done so within the previous four years;

3. is currently registered to a professional or semi-professional sports team, or who has been so registered within the previous four years. This includes all academy and development team age groups;

4. has represented their nation or national team within the previous two years, including all youth and development age groups from under 17’s upwards;

5. has represented their state or regional team within the previous two years, including all youth and development age groups from under 17’s upwards;

6. has an established international reputation in their chosen field of sport;

7. engages an agent or representative, with the aim of finding opportunities as a sportsperson and/or developing a current or future career as a sportsperson, or has engaged such an agent in the last 12 months; and/or

8. is providing services as a sportsperson or coach at any level of sport, unless they are doing so as an “Amateur” in a charity event.

Paragraph 6 of the Immigration Rules also defines an “amateur” sportsperson as “a person who engages in a sport or creative activity solely for personal enjoyment and who is not seeking to derive a living from the activity. This also includes a person playing or coaching in a charity game”.

The Home Office previously defined a professional sportsperson as

someone, whether paid or unpaid, who:

So while under that old definition, somebody playing or coaching unpaid in casual sporting contexts would only be in trouble if they had a past, present or future sporting career to their name, it now seems to be forbidden for anyone to play or coach unpaid “at any level of sport” except in a charity game.

It used to be the case that the holder of a visa that prohibited work as a professional sportsperson could still, for example, coach their kid’s football or netball team on a Saturday morning. This was as long as they were doing it solely for personal enjoyment and not deriving a living from it.

Under the new definition, there is a risk that the Home Office could interpret the rules as meaning they would only be able to coach the team without breaching their visa conditions if they were doing so as part of a “charity event”.

I cannot for the life of me see how a parent coaching their child’s team on an amateur basis causes any risk at all to UK immigration control.

The Home Office also appears not to have considered the effect of this change on the range of sports courses that are offered by UK universities and other education providers. Many of these include work placement elements where a student on, for example, a BA Sports Coaching course will spend time working as a coach as part of their degree.

Most visas, including Tier 4, restrict the holder from working in the UK as an entertainer. However, the Home Office allows international students who are studying a dance or music course at degree level to undertake work placements. This means that the student can take part in a performance, which they would otherwise be restricted from doing.

Non-EEA nationals who are professional sportspersons are able to come to the UK and perform related activities providing they are sponsored under Tier 2 (Sportsperson) or Tier 5 (Sportsperson). It may be possible to use this, instead of Tier 4, in certain scenarios but that would be potentially complicated as there are a number of other requirements that sponsors of professional sportspersons need to meet (these are contained in the sponsor guidance).

Hopefully with enough lobbying from the education sector and other relevant organisations, the Home Office will provide more clarity on the activities that are and are not covered; relax the restrictions; or at least allow certain exceptions.

In the meantime, anyone with leave to enter or leave to remain that prohibits activity as a professional sportsperson would be wise to carefully review the above definition. They should ensure that any activity performed is not of a type that will place them at risk of accidentally breaching the conditions of their stay in the UK.

If an allegation of a breach is made then, first of all, it will be important to check that the Home Office imposed any conditions of stay lawfully. If they did not do so, it should be possible to mount a successful challenge.