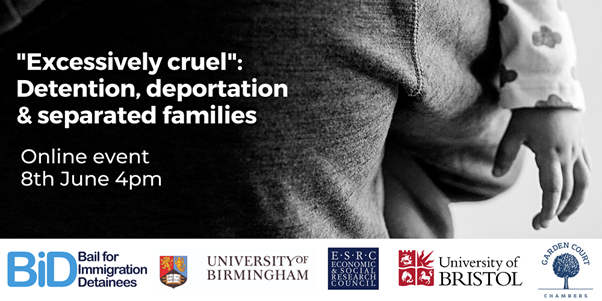 New research being launched on 8 June explores the impact of the UK’s immigration system on mixed-nationality families. At a webinar chaired by Baroness Shami Chakrabati, Dr Melanie Griffiths will speak about her research into how UK families are affected by a family member’s insecure immigration status and the threat (or reality) of separation through detention, removal or deportation.

In-depth interviews with 30 couples were combined with interviews with practitioners, observation of deportation appeals and analysis of changing Article 8 protections, to show how the precarious immigration status of one family member has significant and wide-ranging impact on the whole family, including British citizens and children. As a result of a parent or partner’s immigration status, British citizens also find themselves living under chronic insecurity, with the ongoing threat of either being separated or forced to leave the UK. The whole family is harmed, often in extreme ways and across all aspects of their lives. People are made sicker, poorer, unhappier and disenfranchised from their citizenship. Children’s behaviour, mental health, education, financial security and feelings of Britishness and belonging are significantly affected.

The report is being launched via webinar at 4pm on 8 June 2021, in collaboration with Bail for Immigration Detainees. Speakers include Sonali Naik QC and a parent directly affected by these issues. It’s free and open to all: register here.

For more information about the project and its outputs (including blog posts, journal articles and policy briefings), and to download the report after 8 June, you can visit the project webpage.