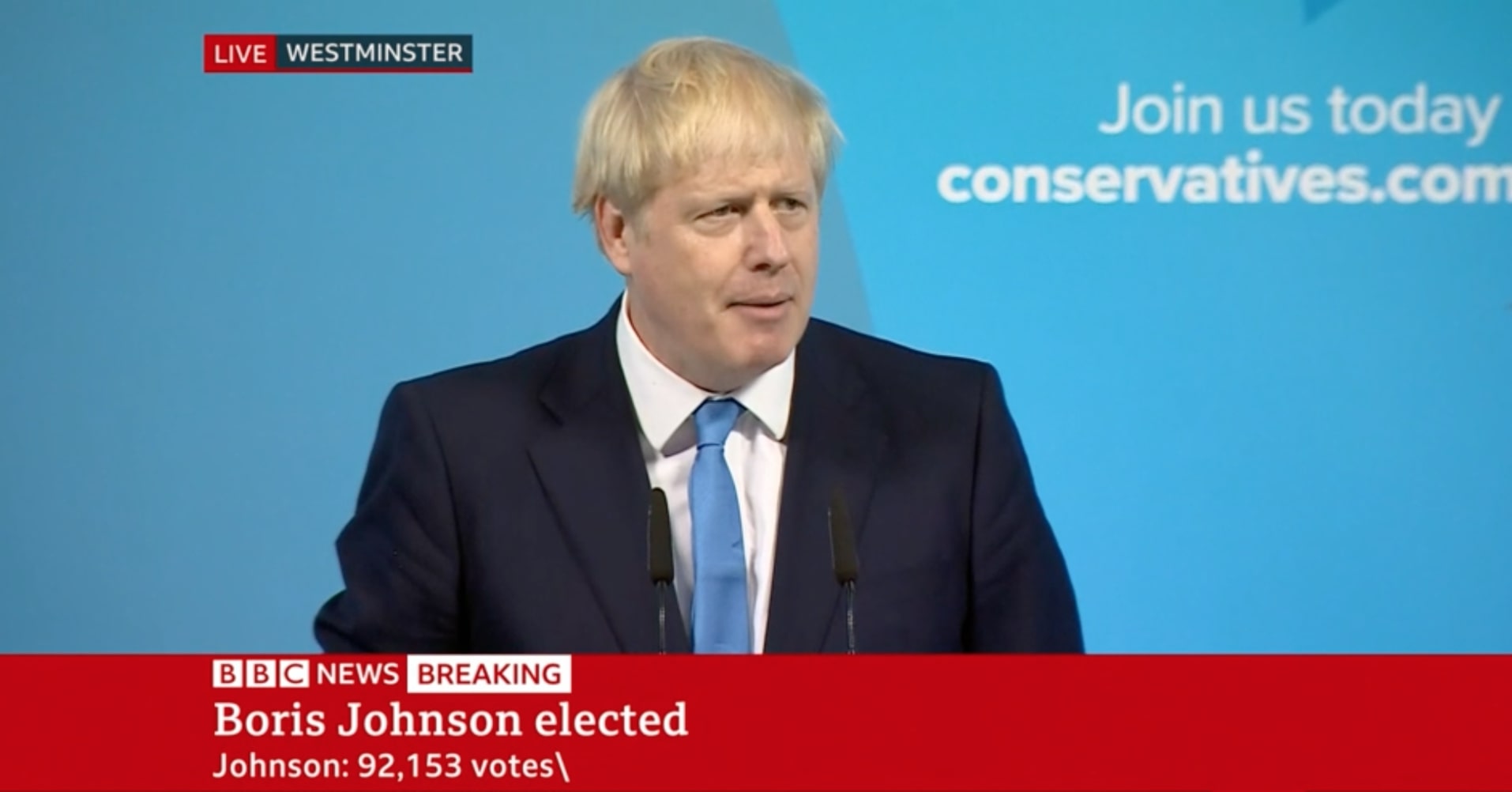 What does Boris Johnson really think about immigration?

Boris Johnson is the new leader of the Conservative Party, and our next Prime Minister. How might he change the UK government’s policy on immigration? An important question, and when it comes to Johnson potentially a Sisyphean task, given his reputation as someone who will say whatever he thinks will wash at the time, using references to Greek mythology to lend gravitas [self-conscious cough].

The direction of travel when Theresa May became Prime Minister was hardly a surprise. She had spent several years as Home Secretary, seeking to reduce what she saw as too much human rights in immigration decision-making, drastically curtailing rights to appeal, and single-mindedly pursuing the net migration target. The Home Office under her leadership became steadily more insular, hostile and intransigent.

But whatever could be said about Mrs May (and this blog has said quite a lot), she certainly took a keen interest in details and maintained a close connection with her old brief even after becoming PM.

Johnson, as we know, is an entirely different prospect. Regarded as a man not concerned by details — and the immigration system as currently constituted is nothing but details — he is seen as superficial, inconstant and blustering.

On the flipside, he is far more effective as an orator and communicator than May and would stand a better change of selling unpalatable measures to his party’s right wing.

Observers have detected an ongoing thaw in the Home Office, as policy wonks emerge blinking from deep within the department to discuss reform. The government white paper on the future “skills-based” immigration system”, published in November 2018, has heralded a definite sense of greater Home Office engagement. The perception is that with May leaving and the public mood on migration softening, change is coming.

Some promising noises on “amnesty” and net migration

On a review of Johnson’s statements on immigration, a few themes arise. For one, we know that he is wary of being tied down with the net migration target.

Johnson refused to engage in promises about the net migration target in his final debate with Jeremy Hunt, stating:

I am not going to get into some numbers game. We will have control. That is what people voted for.

We also know that he has invoked on various occasions an amnesty for long term undocumented residents. Karma Hickman has already written an excellent article on what might be meant by an “amnesty”. While not radically different from existing schemes, it has also led to pushback from right-wingers.

So the starting point is that there are some liberal green shoots showing through.

A “points based system”, which could mean anything

As Joanna Hunt has pointed out, while Australia is associated in the public mind with tough rules on immigration, their system is in fact pretty liberal, and the Migration Observatory says today that any revamped points based system could be restrictive or not depending on the design.

It is, however, not entirely clear that Johnson has the first clue how any such system would be designed. For a start, he describes his points-based ideal as one where foreigners “must have a job before they arrive”. This is precisely the opposite of how it works in Australia, where a key feature of the points based system is that workers who score enough points do not need sponsorship.

At the Tory leadership hustings in Bedfordshire, Johnson stated: “If the agricultural sector in Norfolk needs people to come and pick turnips or whatever, there should be a system that is transparent and intelligible by which they can come.” Most of the news reports stated that Johnson said this in the context of an Australia-style points based system.

Your intrepid reporter had to check this for himself. Did Johnson really invoke turnip pickers in the context of a points based migration system for skilled workers (Australia awards points for degrees up to PhD)? Yes he did: here is the link to the hustings video at the right time.

To my mind this reinforces what is often said about Johnson; his superficiality when it comes to policy. A points based system, based on the educational, language and work experience “attributes” of a worker, does not seem very suited to regulate the engagement of migrants performing less skilled, manual labour. Would a turnip picker need to speak English? Or have a qualification? What attributes might they have to possess? And is Johnson talking about regionalisation of immigration, whereby Norfolk could have its own distinct immigration regime?

This is a statement which just would not wash in any serious discussion about immigration. Indeed if you take the time to watch the clip, it is strikingly unfocused and muddled. It makes little sense in a policy context; it just plays to the crowd.

The interesting thing is Johnson is choosing not to engage with the already published government white paper on future immigration policy. If he did, then he would know that the government is proposing an unskilled route for workers to enter the UK, for a defined period and without the expectation of integration or settlement. He would also know about the proposals to reform the so-called points based system we have already, and to broadly liberalise the work visa regime (in the broader context of the ending of free movement from the EU).

This is important. We now have a situation where the government has published fairly sweeping proposals for reform through the white paper, is actively engaging in dialogue through civil servants about that reform, and has instructed the Migration Advisory Committee to produce further, detailed proposals on change (for example to review the £30k minimum salary threshold for a skilled worker visa). The white paper had endorsing forewords by both Theresa May and Sajid Javid. Yet Johnson has made, as far as I can detect, no reference to it at all.

Are we in a situation when it will be ‘year zero’ with Johnson? All bets are off? Again, that could militate in favour of a more liberal regime overall. Indeed Jonathan Portes, writing in the Guardian, notes that public feeling on immigration has shifted, and believes that Johnson could be prepared to relax immigration controls. Similarly, the perceptive Newton Emerson writes that ditching Theresa May’s red line on free movement from the EU could unlock a fresh deal with Brussels.

My own view is that the reality will bite once Johnson is in power. So far we have had platitudes. But significant reform, overnight, of our highly complex and messily evolved immigration system seems unlikely.

Behind every Home Office policy are whole teams of highly experienced civil servants. The law and policy they develop is fraught with complexity and fear of unforeseen consequences neuters radical change. It is a bit like trying to steer the Titanic; it will take some time and effort to radically change course.

Perhaps there is a lesson from May’s tenure as Home Secretary and later Prime Minister. Change took time, and was an incremental process — and this was from a leader known for her intransigent approach and bloody-mindedness.

It seems unlikely that Johnson is going to be able to embark on fundamental reform, distinct from that which has already been mapped out, and acted upon by the Home Office. It’s not like he hasn’t got anything else to get on with. We will have more flimflam, and spin put on existing but re-branded arrangements.

Insisting that migrants speak English, which we already do

Johnson has also spoken about the need for immigrants to learn English, stating

there are parts of our country, parts of London and other cities as well, where English is not spoken by some people as their first language and that needs to be changed.

Yet as everyone who has even a passing interest in our system knows, the requirement to speak English is a fundamental part of most immigration routes, and a requirement to settle or gain British citizenship. One of the few prominent exceptions is for multi-millionaires applying under the Tier 1 (Investor) visa route.

Johnson’s comments here reveal an ignorance of our current system, and the usual focus on England as “our country” rather than the UK which incorporates regions where Welsh and Gaelic are spoken as a first language.

The other big issue is that of of EU citizens living in the UK. Johnson has said:

We must also ensure that EU nationals’ rights are protected. This should have happened straight after the referendum. I will sort it out immediately and make sure that this issue is properly dealt with and millions of people can stop worrying.

This is a message which sits awkwardly with the existing system, of settled and pre-settled status for EU nationals. In policy terms it is strongly suggestive of some kind of declaratory status as recommended by the Home Affairs committee of MPs. In other words, Parliament simply passes a law saying that all EU citizens living here before B-Day are lawful, while continuing the settled status scheme allowing them to register for proof as and when they need it.

This is the way to remove worry, to end the need to apply for documentation by a certain date, and confirm rights by operation of law. If Johnson means what he says it would be a very positive move.

I would guess the sense that he is unlikely, once in power, to depart significantly from the EU Settlement Scheme, given the significant infrastructure already in place. But a potentially an easy win for him would be to enact new legislation which would provide for an assured declaratory status on top.

Cause for cautious optimism

At the end of an extensive review of Johnson’s recent public statements on immigration I am left none the wiser. Some of what he says is demonstrably muddled. But his comments on EU citizens should be seized upon. This is because they reflect a clear commitment which aligns closely with existing proposals as set out in the Home Affairs Committee Report.

Johnson is right about the UK’s approach to EU nationals; their status should have been resolved long ago and can be. This is something he can be pinned down on, unlike his soundbites skirting around the issue of broader migration policy.