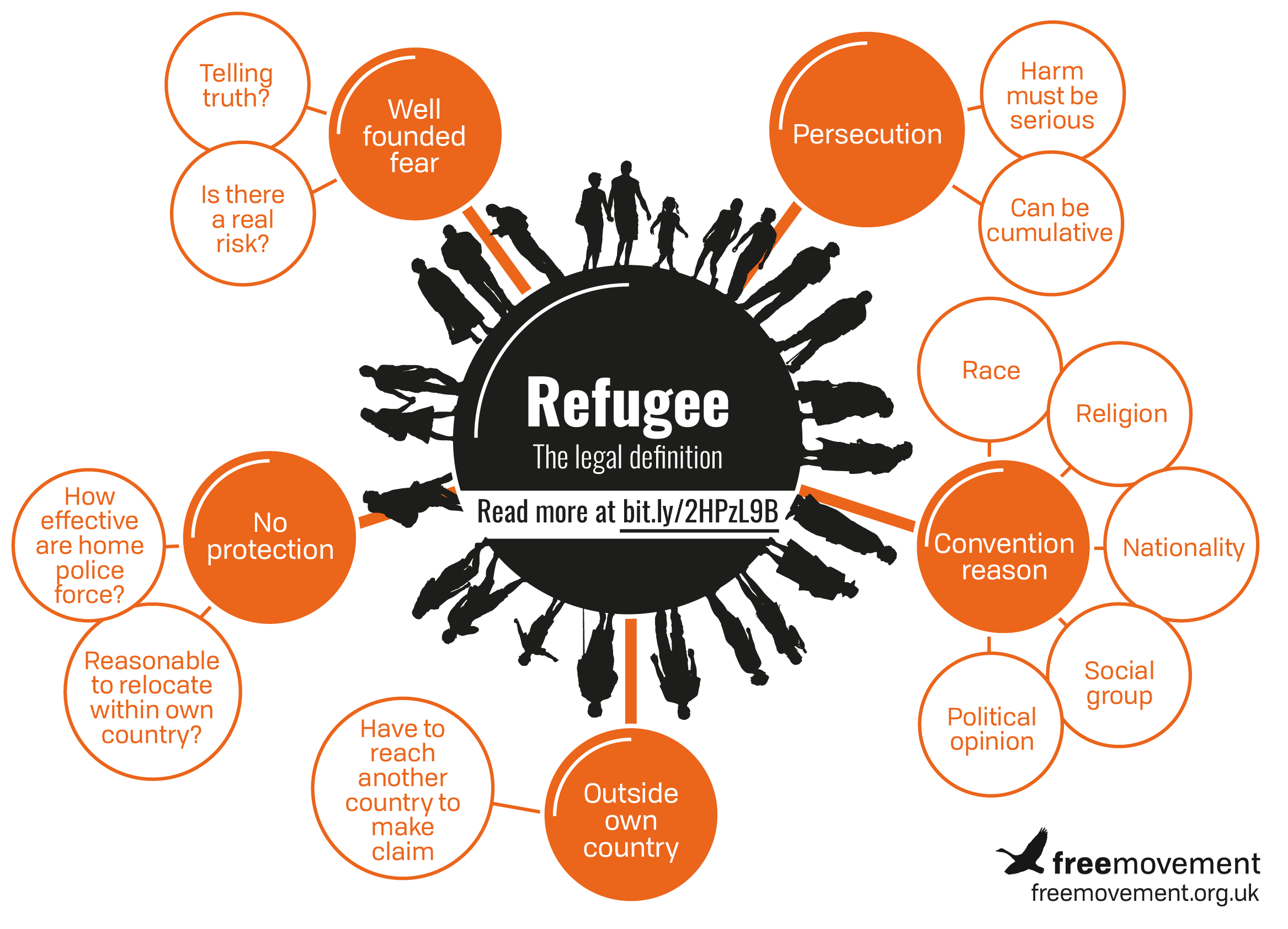 This week is Refugee Week. On Free Movement we try to communicate complex legal issues in immigration and asylum law in a clear way and here we answer the question “what is a refugee?”

Before we get to that, we have loads of content about refugees and asylum on our website. The best place to see what we’ve got is to take a look at our revamped Asylum Hub page. There you can find our refugee law starter pack, our collection of articles addressing various asylum myths, our 60 second explainer videos, our most recent articles about trafficking, links to important Home Office policy documents about asylum, signposts to top organisations and charities working with refugees and much more.

We are planning some other new refugee-related content for you over the next few days as well, including a piece on the official statistics about who is claiming asylum in the UK, from what countries and what happens to them after they make their claims. If you are interested in refugee issues, you can sign up to our refugee and asylum newsletter here. As soon as we publish something on refugee or asylum law, we’ll send you an email about it. You can also optionally sign up for our main weekly newsletter and, if you want to, one of our other newsletters providing instant updates on some other selected immigration law topics.

What is the Refugee Convention?

The Convention was passed by a special United Nations conference on 28 July 1951 and entered into force on 22 April 1954. It was initially backward looking, in the sense that it was limited to protecting those who became refugees before 1 January 1951. The 1967 Protocol gave the Convention new life, making it a living, forward looking instrument that offered protection on an ongoing basis.

You can read about the history of the Refugee Convention and its full text on the UNHCR website here.

Not all countries have signed up to both the original 1951 convention and the 1967 protocol and some have retained the optional geographical limitations which were permitted when the Refugee Convention was first created. Turkey, which in 2021 hosted some 4 million refugees, has ratified both the convention and protocol but maintains the original geographical limitation to “events in Europe”, with the effect that Turkey is therefore under no international law obligation to offer those refugees the rights set out in the convention.

The legal definition of the term “refugee” is set out at Article 1A(2) of the Refugee Convention, which defines a refugee as a person who:

The definition can be broken into constituent parts:

All of the conditions need to be met for the person to be considered a refugee. For example, a person might have a well founded fear and be unable to get protection but if that person does not fear being persecuted for a Convention reason then the person is not a refugee in legal terms. Another person may meet all the other criteria for refugee status but be living in a refugee camp in their own country, in which case he or she is not a refugee and instead would often be referred to as an Internally Displaced Person.

In casual conversation or in the media the word “refugee” is often used to refer to people fleeing civil war, disaster, famine or conflict. There is nothing wrong with calling them refugees, but they do not necessarily meet the legal definition of a refugee in the Refugee Convention. Even victims of civil war do not always qualify for refugee status, if for example they are considered not to have been targeted by either side in the conflict but to have fled the general security situation.

Want all this explained in just 60 seconds? Check out our new video on the Refugee Convention:

Want it all explaining in boring old written words? Read on…

What does “well founded fear” mean?

There are two dimensions to “well founded fear” under the Refugee Convention:

In refugee cases the standard of proof is expressed as “reasonable degree of likelihood” or “real risk”. This standard is applied both to assessing whether the refugee is telling the truth and what the chances of something bad happening are in the future.

What does “persecution” mean?

The meaning of “being persecuted” is not defined in the Refugee Convention itself. This is deliberate: it allows the meaning of the word to be flexible and to evolve over time. This is useful for refugee protection purposes, but it does mean that the student of refugee law will need to look to various other sources and reference points in order to understand the contemporary meaning of the word and how it has evolved. These sources include the views of UNHCR (the office of the United Nations High Commissioner for Refugees) and refugee law academics, other relevant international legal instruments and the domestic and international courts.

The respected UNHCR Handbook begins its description of persecution at paragraph 55:

There is no universally accepted definition of “persecution”, and various attempts to formulate such a definition have met with little success. From Article 33 of the 1951 Convention, it may be inferred that a threat to life or freedom on account of race, religion, nationality, political opinion or membership of a particular social group is always persecution. Other serious violations of human rights — for the same reasons — would also constitute persecution.

The courts have been wary of giving specific guidance on the level of ill-treatment required before that ill-treatment can be described as ‘being persecuted’. The reason for this apparent vagueness is simply that the most judges realise that rigid guidance is inappropriate. As Guy Goodwin-Gill says in The Refugee in International Law, 2nd ed. (Oxford, 1996):

There being no limits to the perverse side of human imagination, little purpose is served by attempting to list all known measures of persecution. Assessments must be made from case to case by talking account, on the one hand, of the notion of individual integrity and human dignity and, on the other, of the manner and degree to which they stand to be injured.

Some guidance has emerged over time as to the level of seriousness the treatment must attain. In the first real reported refugee law case in the UK, R v Immigration Appeal Tribunal, ex p Jonah [1985] Imm AR 7, Mr Justice Nolan suggested that the word should be given its ordinary dictionary definition meaning. The Shorter Oxford English Dictionary provided two meanings, which Nolan J adopted: firstly, ‘To pursue, hunt, drive’ and secondly ‘To pursue with malignancy or injurious action; esp. to oppress for holding a heretical opinion or belief’. The textual approach is not considered a particularly useful one today, however.

The issue of state protection is examined in more detail below, but “serious harm” is as close as the UK courts have come to offering a working and readily intelligible definition of the high threshold for persecution.

How important are the Refugee Convention reasons?

The five Convention reasons — race, religion, nationality, social group and political opinion — are very important because without showing that the future risk is because of one of these reasons, a claim to refugee status will fail.

This means that some people commonly referred to as refugees are not formally refugees within the legal meaning of the Refugee Convention. For example, people who flee their homes due to famine or flooding or environmental disaster do not fear persecution for any of the Convention reasons.

Boris is a wealthy businessman. He has been targeted by a criminal gang in order to extort money from him. He fears that the police of his own country cannot protect him so he flees abroad.

It is hard to see how Boris faces persecution for a Convention reason in a case like this, unless the criminal gang is linked to the state and he is in truth being targeted for political reasons. On the face of it, Boris is therefore not a refugee.

Most of the Convention reasons are fairly self explanatory. We all know roughly what is meant by race, religion, nationality and political opinion. Some further explanation and definition can be found in the EU Qualification Directive and in case law but these words are mainly interpreted within their ordinary meaning.

The Convention reason most open to interpretation is “membership of a particular social group”.

There is some legal consensus on what it does not mean:

There is also legal consensus on what it does mean.

Women have been held to be a particular social group where there is evidence of systematic State discrimination against women: Shah and Islam [1999] 2 AC 629.

Females at risk of Female Genital Mutilation were held to be members of a particular social group in K and Fornah [2006] UKHL 46.

Being a member of a family was also held to be capable of being a member of a particular social group in K and Fornah [2006] UKHL 46, even where the persecution directed against the family originally arose for reasons other than under the Convention. This brings a victim of a blood feud potentially within the scope of the Convention, for example.

Gay men and women were held to be capable of constituting a particular social group in HJ (Iran) [2010] UKSC 31 where there is evidence of discrimination.

What level of protection is needed?

The Refugee Convention has been described as offering “surrogate international protection”, meaning that where a person’s own state persecutes and/or fails to protect them, they are entitled under international law to seek protection elsewhere.

Where a state is persecuting a person, the issue of protection does not really arise. The police are unlikely to offer protection and may indeed be agents of persecution, and it is unlikely in a state persecution case that the victim will be able to find anywhere safe in the country concerned.

Where the persecution comes from private individuals or non state actors, such as a political organisation, a faction in a civil war or a terrorist organisation, the issues of state protection and internal relocation become more relevant.

In a case called Horvath [2000] UKHL 37 the House of Lords held that the test is whether the system of protection is one which is generally effective as opposed to one which guarantees prevention of harm for the person seeking asylum. This was a controversial decision and it can mean that an asylum seeker is sent back to a country of origin even though there is a well founded fear of serious harm.

What else is in the Refugee Convention?

As well as the definition of a refugee at Article 1A, the Refugee Convention includes articles dealing specifically with Palestinian refugees, loss of refugee status, exclusion from refugee status and the rights of refugees.

The Refugee Convention is a hugely important international legal instrument and is almost certainly the single law that has saved the most lives in history.

This article was originally published in June 2018 and has been updated so that it is correct as of the new date of publication shown.